In the Midst of the Sea 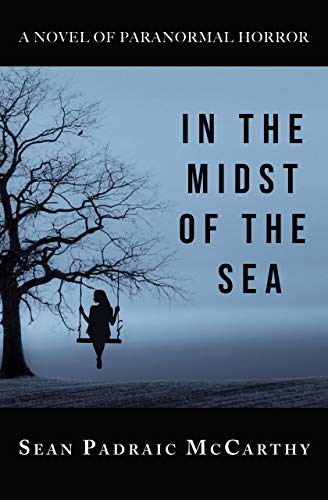 “As the first novel of an award-winning short story writer, In the Midst of the Sea makes an impressive debut.”

It was an old house in Martha’s Vineyard, owned by Ford’s aunt. Now it is Ford’s and he, his wife, Diana, and stepdaughter Samantha are going to live there.

Ford and Diana have had their ups and downs in their marriage. Perhaps a change of scenery will make things easier for them.

For a while, everything is better between the two, but with the changing of the seasons and the island’s desertion by tourists, the house itself seems to change. Diana swears she sees people, glimpsed briefly, then disappearing, especially in the cellar. Samantha develops a liking for one of the antique dolls from the deceased aunt’s collection. She calls her “Elizabeth” and says Elizabeth talks to her.

Diana isn’t certain which bothers her more, Sam’s fixation with the doll or her brief glimpses of figures in the shadows.

“She wanted to leave and yet she didn’t. What if she said the stress was getting to be too much, that she feared she might be having a breakdown, that she had begun seeing things. People? Ghosts? And Sam was making up people to have conversations with?”

Worst of all, Ford becomes pathologically possessive, refusing to let Diana visit her family or his, and forbidding her to leave the house when he’s away.

If it wasn’t for Michael, the stranger she meets, a sympathetic artist who takes a startling interest in her welfare because she “reminds him of someone he once knew,” Diana feels she might truly go mad.

“Maybe we often see people who aren’t really there but we don’t realize it,” Michael said. “Just a few of us, sensitive souls, get a glimpse of them out of the corner of our eyes. True ghosts of some sort. Maybe time is a man-made illusion because our brains can’t tolerate the fact that there’s no beginning or end and we don’t ever really die. Sounds mad, if you think about it.”

She can’t know that a terrible tragedy was played out in the old house, and if something isn’t done, if no one interferes, she and Ford are doomed to repeat what happened—unless she accepts the stranger’s offer of help, but does she dare?

Noted as “a novel of paranormal horror,” In the Midst of the Sea lives up to that claim, with a slow but insidious creeping toward an evitable disaster doomed to repeat itself again and again.

Though this may first appear to be the usual “old house with secrets spilling into the present” scenario, the novel soon proves itself by rising above the usual clichés into a chilling thriller.

Interspersing Diana’s experiences with excerpts from the more than a century old journal of Elizabeth Steebe, wife of the original owner, to show the parallels between what happened then and what is happening now, the author slowly builds the story to an inevitable but acceptable climax.

As the first novel of an award-winning short story writer, In the Midst of the Sea makes an impressive debut.