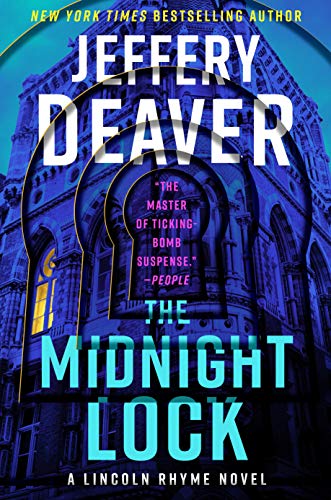 “The Midnight Lock will find its way to the top of your To Be Read pile as mysteriously and effortlessly as the Lockmaster slips into the bedrooms of his unsuspecting victims.”

He’s known as the Lockmaster. He breaks into the homes of women who live alone, watches them while they sleep, fixes himself a snack, rearranges their possessions, takes a trophy or two, and leaves.

There’s no violence, no assaults, no threats. Just a message written each time on page three of the same issue of the Daily Herald, using the woman’s lipstick: “Reckoning—The Lockmaster.”

With Lincoln Rhyme under fire from the mayor for an apparently botched investigation and on the outs with the New York Police Department, will the Lockmaster’s voyeuristic intrusions continue unabated until they finally devolve into murder?

After a three-year hiatus, Jeffery Deaver returns to the book racks with a new Lincoln Rhyme-Amelia Sachs novel, The Midnight Lock. The 15th in this series featuring Rhyme, the quadriplegic investigative consultant, and his wife, NYPD detective Amelia Sachs, it follows The Cutting Edge (2018) and The Burial Hour (2017).

Deaver has reduced the process of writing successful commercial fiction to a formula. He alternates point of view between Rhyme and Sachs and the bad guys; he uses a particular subject as a hook to grab and maintain his reader’s interest; he creates threatening pressure on Rhyme from the very law enforcement agencies he’s trying to assist; and he manufactures surprise plot twists and an unexpected ending.

In this one, he tells much of his story either from the first-person perspective of the Lockmaster; the third-person perspective of Viktor Antony Buryak, another Rhyme antagonist; or from Rhyme himself. Although this constant shuttling back and forth can be distracting and counterproductive to momentum, it’s a technique that works for Deaver because he uses it as an opportunity to play with the subject matter that serves as his hook.

In The Cutting Edge he explored diamond cutting and the diamond industry using secondary characters involved in the business. Here, he delves into the ins and outs of lock picking and loopholes in our personal security that can be exploited by someone as talented and dedicated as the Lockmaster.

Rhyme and Sachs continue to be an effective duo. They’re complementary investigators because the former is a self-styled “science cop” while the latter functions as a “people cop” to cover off the soft-skills side of the team. Fans of the series have become quite attached to the pair.

But Deaver’s formula always calls for his protagonists to be messed with in a major way. The pressure on Rhyme in The Cutting Edge came from an FBI agent itching to throw him in jail, while here it comes from the NYPD itself, which terminates his consulting contract on the orders of the mayor.

Oh no! Will Rhyme be caught working the Lockmaster case offline and finally sent to jail? Will the Lockmaster’s identity remain a secret, elevating him to the level of another long-term Rhyme nemesis, the Watchmaker?

Deaver’s formula also calls for a plot that’s structured so as to throw twists and turns into the works as often as possible. To avoid spoilers, let’s leave it at a simple warning: In the world of Jeffery Deaver, nothing is quite what you think it is.

It must be said, though, that the games he plays with his story in this novel come off as contrived and, well, not very believable. Particularly irritating is the major plot twist that requires a five-day flashback to explain, right in the middle of things, necessitating a bit of page-flipping to check the date stamp on the section header to confirm that, yes indeed, this is a sudden and abrupt loop in the timeline.

However, the things that annoy and irritate in The Midnight Lock seem to be the very things that also keep him at the top of the New York Times bestseller list, novel after novel. And when we figure that one out, maybe we’ll all have a shot at producing the next overnight bestseller.

As it is, we should smile and tip our hat to an author who’s definitely figured it all out.

Rest easy, fans. The Midnight Lock will find its way to the top of your To Be Read pile as mysteriously and effortlessly as the Lockmaster slips into the bedrooms of his unsuspecting victims while they sleep.