The Midnight Assassin: Panic, Scandal, and the Hunt for America's First Serial Killer 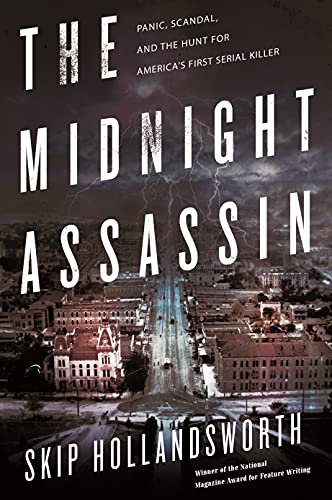 Skip Hollandsworth, journalist and editor of Texas Monthly magazine, has written a challenging if somewhat convoluted narrative about what he believes is America’s first serial killer. Set in Austin, Texas—the capitol of the newly minted Lone Star state— The Midnight Assassin recounts a series of eight ghastly murders that were committed during the years 1884 and 1885. More like annihilations, these butcheries incited panic and paranoia in this frontier town of 17,000 people, and undermined municipal efforts to make Austin a mecca of prosperity and modernism.

The murders were mostly of young servant girls who were hacked to death in their beds in tiny wooden shacks in the middle of a bright moonlit night and then dragged outdoors. Several of the victims were disemboweled and had a sharp steel rod thrust into their head and through their ears. Several of the women were raped.

Confounding the pattern, two white upper-class women also were murdered and mutilated on Christmas eve, 1885, the last of the murders. Their husbands were tried. One was found guilty (his conviction was overturned) and the jury hung on the other case.

The killer was never caught, although tantalizing clues point to several potential  suspects. Some observers believe that the killer fled Texas, traveled to London, and recreated himself into the legendary Whitechapel killer famously known as “Jack the Ripper.”

Curiously, as Hollandsworth notes, despite this story being one of the greatest American murder mysteries, and the Austin killings a sensational news story nationally and internationally, it is largely forgotten. Indeed, it is not mentioned in books on Texas history and only briefly in true crime accounts. So Hollandsworth deserves considerable accolades for digging into the story from faded newspaper articles, old scrapbooks, crumbling pages of diaries and letters, and long-forgotten records in boxes stored in the back rooms of libraries and government offices. He intersperses his narrative with old photos of key players,  places, and news accounts that amplify and enliven the story.

Hollandsworth’s title comes from a local journalist’s description of the killer. It wasn’t the only one. The short story writer O. Henry, who lived in Austin at the time, wrote in a letter to a friend that the killings were attributable to the “Servant Girl Annihilator” who, he mused,  “makes things lively in the dull hours of the night.”

Hollandsworth vividly captures the ambience of this rising metropolis, including construction of the new state capital, the fledgling University of Texas, the opulent Driskill Hotel, and the lunatic asylum from which some people believed the killer may have resided.

Law enforcement’s response to the killings was feeble, and at times comical. Detectives thought it might be the work of Comanche Indians encamped near the city, a crazed itinerant outlaw, or a deranged black man. Indeed, given Austin’s large black population, many people believed that “Bad Blacks” were responsible for the murders. After each killing, police swept up black suspects, interrogated and tortured them, and then released them for lack of evidence.

The few eyewitness accounts were all over the place, describing a white, black, and maybe yellow assailant, dressed in male and maybe female attire, perhaps wearing a mask. Police bloodhounds were rushed to the scenes but were never able to detect a relevant scent.

It is difficult to believe that in such a relatively small city, with houses so close together and everyone alerted to the threat, that a killer could enter a house, hack to death the inhabitant, and depart without a sound, or a barking dog, or leave any evidentiary trail. Hollandsworth believes, wistfully, that someday, some scrap of evidence may serendipitously emerge—in a forgotten filing cabinet or in someone’s attic—that offers a telltale clue to the identity of the Midnight Assassin.

Perhaps that clue has already been discovered. A PBS TV documentary last year on History Detectives identifies the killer as a 19-year-old black man named Nathan Elgin who was apprehended by police soon after the last killings as he was about to kill a helpless girl whom he dragged form her house.

An autopsy revealed that Elgin had a toe missing from his right foot. During the investigations of several of the serial murders, the police noted bare and bloody footprints apparently of the perpetrator which had an unusual feature: the right foot appeared to have only four toes. And the murders ended after Elgin’s death.

Hollandsworth for various reasons discounts the possibility that Elgin is the Midnight Assassin. And no other credible suspect has ever emerged. So we are left with a spectacular and unsolved crime and an intelligent book. In the end, however, despite Hollandsworth’s best efforts to present a dramatic, coherent, and satisfying story, an unsolved mystery that remains unsolved is ultimately unsatisfying.

Bennett L. Gershman is an original faculty member at Pace Law School in White Plains, NY, where he teaches courses in Criminal Procedure: Investigation, and Evidence as well as Constitutional Law He is the author of Prosecutorial Misconduct 2d ed. and Trial Error and Misconduct 2d ed.