Metropolis: A History of the City, Humankind's Greatest Invention 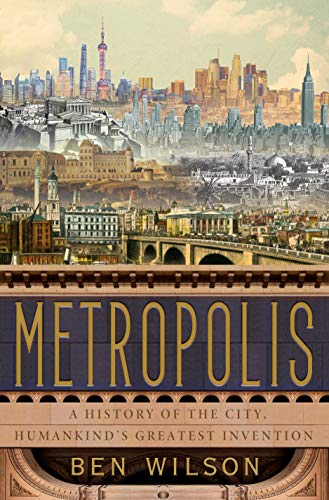 “Cities truly have occupied a unique place in human history and civilization and this timely book certainly relates how cities have become so critically important to humanity’s rise.”

The rise of cities and urban living has been a hallmark of human civilization, and Ben Wilson argues, the greatest invention of man. Starting at the beginnings of ancient city of Ur, the author moves through the centuries by examining the greatest cities of each era through a multitude of cultural, social, and economic lenses to provide a comprehensive look at how urban living has advanced the development of civilization.

As the author notes, while the growth of cities has always been primarily driven by commerce and trade, the unique social interactions that can only be created by high population densities make cities a significant driver in societal and political change as well. The book dives into the expected discussions of cities as economic and industrial engines and the benefits and drawbacks that evolved; however, there are some fascinating highlights about the role of coffeehouses and the diversity of food and dining found only in cities through the last couple hundred years. It may surprise the Starbucks and food truck generation how much their urban ancestors enjoyed their caffeine and variety of dining options in the 1800s.

The author also shows the enduring changes to how cities grow, change, and ultimately expanded to become the “megalopolis” studied today by social and political scientists as the new city-states—more attached to the global economy than their home country and acquiring their own unique political and economic environment. Wilson’s extended discussion on this topic includes the incredible urbanization of much of the global population in the last half century.

As part of the growing role of cities in society, Wilson also offers a timely examination of urban warfare, a dominant feature of the massive 20th century wars that not only made cities vulnerable to aerial bombardment and potential nuclear attack, but key strategic objectives for many military campaigns. Because of their role as transportation hubs, industrial centers, or symbolic importance, cities such as Warsaw, Stalingrad, and Berlin became major battlegrounds in the 20th century.

Although Wilson gushes with enthusiasm for the benefits of large cities for culture and economics, the timing of this book is ironic to say the least. The last year of global pandemic and societal unrest has given rise to multiple challenges to the country’s largest cities. First, in order to attract capital and global talent, cities must be efficiently managed and services adequately provided. More importantly, cities have to provide that unique environment where multiple cultures and creeds can safely mix.

The challenges of this year have given rise to the second and more significant long-term challenge to the viability of dense urban centers. Cities will be increasingly replaced, at least for the next few years, by a new kind of sprawl— the rise of telecommuting and global delivery companies such as Amazon and Door Dash. The transfer of commercial activity from office buildings to Zoom meetings and the ability to have almost any product delivered to your door minimizes many of Wilson’s primary rationales for the existence of huge cities. Whether they will once again adapt to the long-term effects of 2020 only time will tell.

Cities truly have occupied a unique place in human history and civilization and this timely book certainly relates how cities have become so critically important to humanity’s rise. Hopefully it will not be a tale of how great they once were.