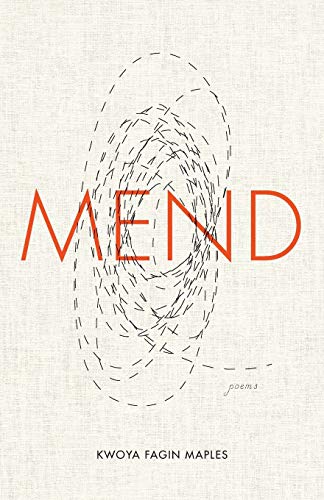 “Maples’ skill as a poet pours through every page of this book. This is difficult material, but she illuminates it with carefully shaped lines and flowing prose-poems. Her voice is vivid, urgent. Every line is powerful. Mend is necessary and magnificent.”

Mend arrives like a book wearing its content warning. Kwoya Fagin Maples takes on one of the quiet atrocities of medical history: “father of gynecology” J. Marion Sims’ experimentation on enslaved black women. Maples side-steps Sims himself, though, in favor of the women on whom he operated, repeatedly, intimately, and without anesthetic. It’s a horror that few can look at directly; the indignity and pain, even at a distance of generations, is breathtaking. Maples looks directly, and with force and compassion.

The book centers the women named in Sims’ autobiography: Anarcha, Betsey, and Lucy. Anarcha features prominently: She was the woman whose fistula (severe vaginal tearing from traumatic childbirth) Sims claimed to have cured (after 30 surgeries, mostly unsuccessful). What, Maples asks, was it like to be that woman?

She pushes aside assumptions of dehumanization and inurement to indignity. Anarcha is no inert subject. In the prose poem “The Doctor Asks If I Want to Go Home the Way I Came,” her desire to heal battles with her pain and humiliation: “My behind is up in the air. Naked as the day I was born, like when that overseer turned my skirts up over my head to give me lashes. I just sit up there on that table and cry.”

Familiarity doesn’t quite breed contempt, but Anarcha’s frustration with this treatment never eases: “Still as you can, Anarcha, he says. The bowls of two pewter spoons are pushed in my body, yet they are kinder than his hands. He names it speculum.” These are passages written by a woman, about a woman, moving and uncomfortable to any woman who reads them. Even modern gynecology is a land of discomfort. Its origins don’t offer any reassurance. There is pain here, and an ingrained racism that never leaves the practice. Black women’s bodies suffer first, treated as subhuman even as their humanity articulates the ordeal that comes first, originates all modern women’s shared experience.

That sharedness is crucial. Black women’s suffering is historically separated from white women’s inviolability. In the sonnet corona “What Yields,” Anarcha speaks what Sims ignores: “First, you’d have to consider us women, / realize our hearts beat under the bush. / . . . / And you would have to know I meet the pain / how your wife would: imagine her blushed pink. . . . / But you cannot hold both of us in mind / at once.” The women who are simultaneously present are not all simultaneously visible. Some are veiled, hidden. They look away and pretend that nothing is happening.

Maples locates herself within this present history. She travels to Mt. Meigs, Alabama, where Sims practiced, to study the place and its history, as if such a thing were easily achieved. Even reaching the place is a struggle. Friendly white local historians celebrate Sims but can’t actually find his home. No one is interested in the women behind the great man. Even Anarcha’s name is lost in their enthusiasm: “He’s famous because he operated on an African American / woman and saved her life!”

Anarcha’s return comes not from local history but from Maples’ connection. She writes of her own life in Alabama and her experiences with pregnancy and childbirth. “My Mother Bathes Me after I Give Birth” articulates the pain of a traumatic delivery and the extent to which modern hospitals still erase mothers in favor of infants. A child is whisked away, nurses give advice, but real care comes from the mother’s mother: “Washing my collapsed belly, crossing the soapy cloth over my / wilted shoulders and back is a familiar act for my mother, and / washing her child is like riding a bike, a thing she will not forget.”

Maples’ skill as a poet pours through every page of this book. This is difficult material, but she illuminates it with carefully shaped lines and flowing prose-poems. Her voice is vivid, urgent. Every line is powerful. Mend is necessary and magnificent.