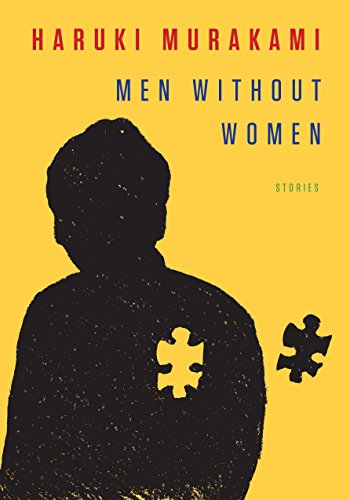 Haruki Murakami is an author who has never been easy to categorize. Over the course of a long and varied career, which has seen a number of novels and short story collections (as well as nonfiction works), he has explored a wide range of literary genres, styles, and themes; such is the case with his newest collection, Men Without Women.

Although the description of the book does refer to specific instances in the book, it is a bit misleading as to their exact nature. Although there are “vanishing cats and smoky bars, lonely hearts and mysterious women, baseball and the Beatles,” this is not a collection of overtly surrealist tales that could be compared to Murakami’s earlier ones such as The Elephant Vanishes or Blind Willow, Sleeping Woman.

Comprised of seven tales, ranging from short stories to near-novella-length works, the title of this collection is more than just a reference to the final story. Although each tale is in some form or another about men, the lack of women in their lives means very different things, including departed loved ones, estranged friendships, and more subtly, a lack of personal connections with the people closest to the characters.

The bittersweet opening tale, “Drive My Car,” is about a man, Kafuku, who hires a woman young named Misaki as his personal driver. As the story unfolds, Kafuku learns more about Misaki—and in turn, she (along with the reader) learns more about him, including the tragic death of his wife by cancer. He goes on to reveal that his wife had had several affairs during their marriage, but following her death, Kafuku had formed a most unusual friendship—with one of her lovers.

The next tale (also curiously—if more directly—named after a Beatles song), “Yesterday,” is a sort of retrospective coming-of-age tale. The narrator, Tanimura, reflects on his younger days spent with his friend Kitaru, who makes a very odd proposal: that Tanimura go out on a date with Kitaru’s girlfriend Erika. As is typical of Murakami’s works, there’s a subtle, almost dreamlike quality to the tale, even with an otherwise direct and straightforward narrative.

“An Independent Organ” also features the character of Tanimura, this time as a friend of a cosmetic surgeon named Tokai. Tokai likes to see multiple women at the same time, yet has an aversion to commit to any kind of deeper relationship. Tokai’s polyamory is presented with a candidly aimless honesty, creating more sympathy than one may expect.

“Scheherazade” is one of the more surreal tales in the collection. Habara is a man who has an ongoing series of flings with a mysterious woman who he secretly has dubbed Scheherazade, after the storytelling character from the classic A Thousand and One Nights. Scheherazade is a storyteller, herself, who ends their nights together by telling strange stories, summed up perfectly in the first of several conversations highlighted within the story: “‘I was a lamprey eel in a former life,’ Schezerahade said once, as they lay in bed together.”

“Kino” is easily the most enigmatic story in the collection, involving a bartender, a customer, a cat, and snakes. Like with “Yesterday,” there’s a subtly surreal quality to the tale that makes its exact plot simultaneously straightforward difficult to describe.

A sort of literary love letter to one of Murakami’s greatest influences, “Gregor Samsa in Love” is, of course, a spin on Franz Kafka’s classic story “The Metamorphosis.” It has a most unusual twist, however: Gregor Samsa wakes up—not as an insect, but as a man, and finds himself walking through an all-too-human life with every bit of the confused and awkward alienation in Kafka’s tale.

And with the morose and ponderous closing title tale, a narrator receives a late-night phone call from a man who reveals that his wife—who the narrator had once dated—had committed suicide. The narrator goes on to reflect on not just history with that woman (referred to only as “M”), but all the various aspects of life he had learned to appreciate in life because of her.

There is something to be said for a good translation. The stories here are translated by Philip Gabriel and Theodore Goossen, the former who has translated numerous other works by Murakami (including his seminal 2002 novel Kafka on the Shore). At times, the translations seem direct and a little awkward, and other times, the English dialect seems almost forced, making for an at times uneven quality that is hard to pin down as being a fault of the translators or Murakami himself.

Newcomers may wish to start with a different title by him, especially if they are looking to primarily read his short stories. Murakami is known for his clever, offbeat (yet never over the top) tales of magical realism and the surreal; and although some of those qualities can be found here, the tales of Men Without Women are more grounded and emotionally driven, making it possibly his most unusual collection to date.