The Men Who United the States: America's Explorers, Inventors, Eccentrics and Mavericks, and the Creation of One Nation, Indivisible 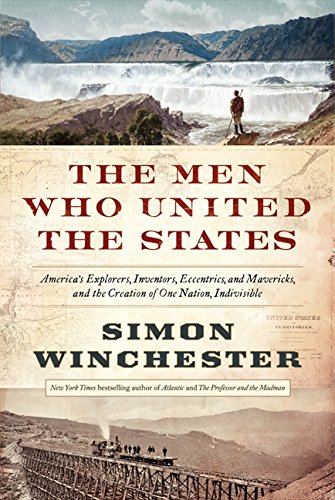 Simon Winchester faced a daunting task when deciding how to conceptualize and write about the history of the many different individuals who contributed to the “uniting” of America.

From explorers and inventors to the builders of the highways, roads, and canals, there was a multitude of historical figures to choose from and a dizzying array of events to describe. How to do this without producing a tedious and confusing book was his challenge.

Mr. Winchester more than meets this challenge in his mesmerizing and fascinating tome, The Men Who United the States: America’s Explorers, Inventors, Eccentrics and Mavericks, and the Creation of One Nation, Indivisible. Mr. Winchester skillfully uses the five classical elements of wood, earth, water, fire, and metal to weave his story about how more than “two centuries of inventive zeal . . . have left as legacy a nation now as comprehensively interconnected and as practically unified as it is possible to imagine.”

He begins his tale with the adventures of Lewis and Clark and other explorers, who “were confronted by endless stands of ancient forest” and used “wooden boats” to paddle through various rivers in their expeditions. Winchester then describes the scientists and geologists who surveyed the land and uncovered “the earth and its riches” and the “possibilities of fertile farmland for crops or livestock.” The story of John Wesley Powell is particularly intriguing as he was the first explorer of the Grand Canyon and did all his surveying despite missing most of his right arm.

The uniting of the country by water is another theme in Mr. Winchester’s book, with vivid descriptions of the building of canals, which were essential for connecting “newly found rivers together in a great vortex of travel, trade, and settlement.”

Mr. Winchester then tells the story of the invention of engines and their use in numerous vehicles so that “the nation could now be intimately linked along roadways and highways traveled by a variety of contraptions, all powered by fire.”

Finally, metal is the theme for another section of the book where Mr. Winchester writes about how the invention and use of the telegraph (copper cable), telephone (steel wire), radio and television (iron mast), and the Internet (titanium, cadmium, and platinum), all became vital parts of connecting people and places throughout the United States.

Mr. Winchester is a master storyteller, and all the individuals, places, and events that he passionately writes about come to life in exquisite detail. There is the tale of Cal Rodgers who made the first transcontinental airplane flight in 1911 between New York and Pasadena.

It was a harrowing 84-day journey, with mishaps and crash landings along the way. But it electrified the country as people gathered in towns and cities across America “summoned by the sight of the black speck in the eastern sky and the distant thrumming roar of an aircraft engine. These were sights and sounds utterly unfamiliar to most, in a country that had never seen anything smudging its skies other than birds.”

Rodgers safely completed his epic journey in November 1911, bonding the country “more closely together by yet another indissoluble band of human achievement.” However, he died just a few months later when he crashed into the Pacific Ocean while doing aerial tricks over Long Beach, California.

There are many other famous pioneers, innovators, and adventurers covered in Mr. Winchester’s book, including Lewis and Clark, Thomas Edison, and Alexander Graham Bell, to name just a few. There are also the not-so-famous, including Theodore Judah, who was instrumental in discovering the best route for the transcontinental railroad and Thomas MacDonald, the father of the Interstate Highway System.

One of the unique aspects of this book is Mr. Winchester’s account of his own adventures traveling across America where he retraces the footsteps of some of the people that he writes about. There are wonderful anecdotes of his hiking around Donner Pass in the Sierra Nevada mountains where tunnels were built for the transcontinental railroad, bicycling along the Mohawk River next to the Erie Canal, and other experiences that provide a nice personal touch to his book.

Winchester, who is British and recently became an American citizen, is clearly in awe of his newly adopted country: “The United States. This unique national quality—of first becoming and then remaining so decidedly united—is a creation that, in spite of episodes of trial and war and suffering and stress, has been sustained for almost two and half centuries across the great magical confusion that is the American nation.”

But there is just brief mention in his book of the victims of the “men who united the states,” such as the native Americans whose land was by confiscated by the push westward, immigrants, particularly Chinese, who were exploited in the building of the transcontinental railroad, and African Americans, women, and others, who for a long time weren’t given the chance to be a part of the uniting of this country.

While addressing these issues in more detail would have improved the book, The Men Who United the States is still a magnificent achievement in writing, storytelling, and education.