A Memory of Violets: A Novel of London’s Flower Sellers 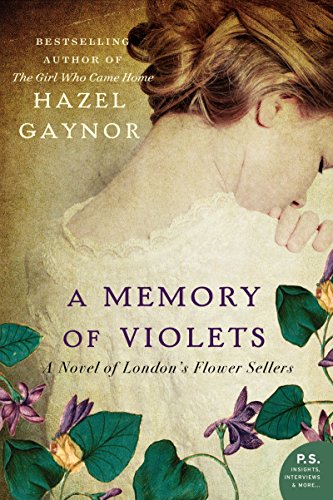 “Given the awards she has already received, we are sure to hear much more from Hazel Gaynor—and that is a good thing.”

Ever since she played the part of Eliza Doolittle in her high school play, author Hazel Gaynor has been interested in the story and plight of London’s flower sellers.

Unlike the story of Eliza, this novel is no romanticized version of a most disenfranchised population—disabled orphans who make their living on the streets selling the dregs of flowers left behind by the retailers. Instead, the story depicts what happens when the main protector of the family dies (usually the mother). These children walked barefooted, an eight year old becoming the surrogate mother for a younger sister age four.

The author provides a strong sense of place and contrast. The flower sellers are subjected to the lowest form of food and shelter, yet in contrast, they are part of the immense beauty of the flower markets daily.

“They found themselves standing at North Hall and the covered flower market.  For a moment, all thoughts of Florrie and Violette were forgotten as they stared at the site before them, every color and tone imaginable, represented by one bloom or another. Marguerite inhaled a deep lingering breath, savoring the sweet scent of stocks, violets  and lavender. . . .

“Pretty, isn’t it,” Mary said. “You’d never think a sight so lovely could exist among all the poverty.”

Gaynor makes good use of sight, sound and smell (with the emphasis on the latter), as she takes us on this journey through the bowels of London, as Mrs. Ingram searches for Rosie’s older sister.

“‘We’re here, m’lady.’ Stepping from the carriage, the two women hurried across the cobbles, stepping around piles of rotting vegetable leaves and all manner of excrement—human or animal. . . . [Marguerite] kept her nosegay to her face but almost retched with the stench all the same, her eyes smarting.”

Only one character is based on an actual person in this vivid historical fiction. He is Mr. Shaw, who is determined to raise the standard of living for this population by providing shelter and new work skills. He raises funds for “the flower homes” and establishes an industry wherein older girls learn to create silk flowers—a trend becoming very popular in the late 1800s.

Some readers might have given up the reading as too depressing; however, the key players make the story uplifting, conveying hope and an ironic sense of life renewing itself.

There are many other plot threads, all of which are neatly woven into the story. Secrets dominate, which adds to the suspense of the story, but also contributes to its quality.

There is, for example, Tilly, the main protagonist whom we meet as she travels from her home in the Lake District to become an assistant housemother at one of the flower homes. She leaves her home to escape her mother’s indifference and grapples with the guilt of running away from her disabled sister.

Florrie and Rosie—sisters and flower sellers—become orphans. Florrie migrates to the flower homes, and sadly Rosie disappears. Tilly discovers Florrie’s diary (many years later) at the flower home and sets out to learn the fate of Rosie. She learns much about herself in the process.

We are introduced to Mrs. Ingram, a benefactor of the Flower Homes. Her secret is revealed—both to her and others-- later in the story.

While the author is an accomplished freelance writer, A Memory of Violets is only her second published novel. Gaynor skillfully reveals selected details, keeping the reader informed, yet wondering—a mark of a talented writer. We learn of a time in London’s history that can inspire the reader without being preachy.

Given the awards she has already received, we are sure to hear much more from Hazel Gaynor—and that is a good thing.