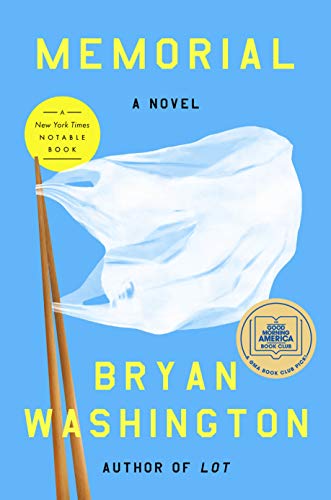 “Memorial is a deeply moving book by a young novelist with a unique voice and a strong sense of optimism.”

There are many histories interwoven in Memorial, Bryan Washington’s bittersweet novel of connections and disconnections. The novel is alternately narrated by two men whose dysfunctional relationship is at a crisis point. Benson is a 20-something HIV-positive African American who is in a turbulent four-year relationship with Mike, a Japanese American. Both have parents who are divorced, both have fathers who need care. While Benson’s family makes occasional appearances, the focus in more on Mike’s parents.

The narrative begins when Mike leaves to care for his terminally ill father in Osaka the day after his mother arrives from Japan for a long visit. That leaves Benson to share his and Mike’s apartment with a Japanese woman he has never met. Half of the novel centers on Benson’s evolving friendship with Mike’s mother; half focuses on Mike’s care for his father who owns a small bar in Osaka’s red-light district. What bonds these tentative couples is food. Mitsuko, Mike’s mother, teaches Benson how to cook Japanese cuisine. Mike, a cook by trade, feeds his father and cooks for the customers at his father’s bar.

Some of the tension in Benson and Mike’s relationship comes from the stark differences in their temperaments. Benson is closed off, non-committal, always complaisant. The only times he doesn’t seem emotionally buttoned up are when he plays with the children in an aftercare center. When he finally explodes furiously at his parents, his father observes that it was the most he ever heard his son say. Mike repeatedly asks Benson for some decision regarding their relationship but never gets a definite answer. Yet they have continued for years fighting and making up with passionate sex. On some level they love each other but some basic connection is missing.

Neither narrator can stay focused on the present. Both describe key past moments with their parents as well as the history of their relationship. Both men have fathers with drinking problems who eventually left their families. Benson’s mother creates a new life and family for herself while Mike’s mother—and father—still pine for each other.

The present of the novel depicts the development of these two men during their separation. Benson’s relationship with Mitsuko moves from his characteristic passive acceptance to a strong bond. At his aftercare center he begins a tentative relationship with Omar, the older brother and primary caregiver of one of Benson’s charges. As his father deteriorates from pancreatic cancer, Mike takes more and more responsibility for the bar, which could become his inheritance if he wants it. There he has a social circle of eccentric regular customers and meets Tan, a Singaporean who lives with his mother in Osaka.

When Mike returns to Houston after his father’s death, he and Benson face a moment of decision. How they resolve the future of their relationship reveals a great deal about their individual temperaments and the extent to which they understand their need for personal growth. Above all, the decision shows how powerful family ties are, even when those ties are confusing and painful.

Benson’s narration of over half of the novel allows us to see his thoughts and feelings, which he avoids, or is incapable of, expressing to anyone, even the man he lives with and claims to love. Only first-person narration would allow us to understand and empathize with this profoundly closed-off personality. He often shares with the reader what he would like to have said before he really offers a complaisant response or says nothing.

There is more dialogue in the section Mike narrates because Mike is effusive although his actions—like inviting his mother to stay with him then flying off to Japan the day after she arrives—can be baffling. The people around Benson and Mike also have trouble expressing their feelings and desires. Mitsuko can be cryptic. Fathers fight admitting their need for their sons. Yet the reader comes to love these sometimes enigmatic figures.

The narration Benson and Mike offer jumps around in time, but that, too, is revealing of their personalities. Mike has a tendency to make lists, particularly lists of things his father loves or hates. Clearly his connection to his father, whom heretofore he hadn’t seen in 15 years, becomes the center of his life.

Yes, Memorial is another novel about lost 20y-somethings, but Washington makes the reader care deeply about his characters who above all want to feel a sense of home. That word—home—resonates throughout the novel.

Bryan Washington is drawn to writing in the first person: his previous book, Lot, also features first-person narration. The reader is allowed to see inside the mind of his central characters but through the eyes of his narrators Washington also offers vivid pictures of the people with whom Benson and Mike interact.

Like Lot, Memorial is set in Houston, Texas, but Washington does not spend much time describing any locale. For these residents, Houston may be home but as a physical entity it is not important. We get street names but very little description. Instead, Washington focuses on his complex, confused characters.

As is the case with a number of major works by gay authors—for instance, Brandon Taylor’s Real Life and Edouard Louis’s History of Violence—the central characters’ homosexuality is a given, not their major problem. The fact that their families are not totally homophobia-free is a side issue.

At first this reader was put off a bit by the fragmentary chapters, which jump around in time, but it soon became clear that this is the way Benson and Mike think and that the connections between past and present are crucial. Family, after all, is a shared past. Memorial is a deeply moving book by a young novelist with a unique voice and a strong sense of optimism.