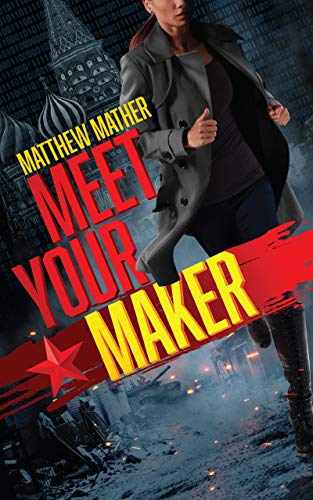 “Mather’s chaotic scenes that place Del in life-threatening situations, and of which she expertly extricates herself, are well written and page turning.”

Delta (Del) Devlin is a cop with the Suffolk County Police Department; a cop who dreams of leaving the force for something better with her eye on the FBI. Her father, a retired police officer encourages her to go for it. She’s certain her application will be a shoo-in but security issues unknown to her in her background suddenly step in the way.

Her life begins to heat up when she accompanies her father to the UN where he is assisting with security at an event where the speaker is the president of the Ukraine. The story ramps up further when her father is at the wrong place and the wrong time, and a bullet meant for the Ukrainian finds its way into her father. A Russian ex-KGB officer, Yuri Korshunov, is identified as the shooter, and the race begins.

With the FBI no longer an option, Del finds herself with an invitation to join Interpol with a position in Europe. Determined to follow and find Korshunov, who she is informed is responsible for this attempted assassination, and while her father remains hospitalized, Del takes on the Interpol challenge. But her goal is much different from that of the organization she now works for—or is it?

Security Officer Jacques Galloul is assigned by Director Katherine Dartmouth to take Del under his wing and train her in the ways of Interpol, and it is obvious from the start that the two are oil and water. Del makes it her goal to avoid working with Jacques; Jacques makes it his goal to stick to her like glue. Not a good match, and Del finds ways at every turn to escape his close controls.

Matthew Mather takes the story from here into international waters with Del making her own way around Europe following the clues, laid out very systematically, in contrast to direct orders from Director Dartmouth, while cagily avoiding Jacques. And here Mather throws in an interesting twist: Del has a special vision that allows her to see a person’s aura and know if they are lying or being truthful.

As she closes in on Korshunov, Del is surprised to receive a message from him asking to meet her and denying that he is guilty of the crime for which he is accused. She follows his directions only to find him dead, with questions still unanswered. Is he really the person she is looking for, or is there more to the assassination attempt than she is told?

Among the characters Del encounters during her search are two competitive businessmen who vie to be the leaders of the 3-D printing business: Lenny Bodnar, whose history with The Black Army puts him in spy territory; and Adam Petty, CEO of Strataform, the leading replicator business in the world. Intriguing situations with 3-D weapons are set before the reader and create thoughts of future—or perhaps current—access to military weaponry that one would rather not think about.

Mather takes Del through very dirty and dangerous waters as she follows the clues he has laid out and as she begins to connect the dots from Korshunov to Bodnar and Petty to her father’s shooting. And as she follows these clues, one by one, the best candidates for the attempted assassination of the Ukraine president, and the subsequent shooting of her father, begin to meet their own demise. Her candidate list is shrinking almost before it can grow and yet her search continues.

Mather’s chaotic scenes that place Del in life-threatening situations, and of which she expertly extricates herself, are well written and page turning.

Mather’s story arc is almost too expansive, and at times difficult to follow; in particular, there is a connection to the (Irish) IRA crimes of several decades past that are difficult to tie into the story, in spite of Mather’s explanation. It should be noted, however, that he brings everything around to a satisfactory ending with the surprise identification of the real criminal.

The story is well worth the read, although the excessive detail at times slows the pace. A good thriller.