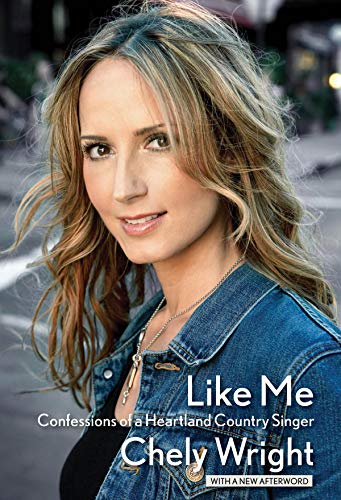 Successful musicians connect and relate to their audience on an emotional level. Often, they channel some great pain from their past in order to give their work an even deeper meaning. In country music especially, everyone loves a gut-wrenching story. Fans easily identify with these songs and can feel like the artist is singing directly to them.

Chely Wright was no exception to this rule. On the surface, Chely was talented and hard-working. She was professional. She was beautiful. She was also the down-home girl-next-door that everybody wanted to be friends with. But her memoir, Like Me, begins as she’s about to commit suicide. Why would someone who’s had a number one single, been nominated for both ACM and CMA award—one of which she won, and been named one of People magazine’s 50 Most Beautiful People—even contemplate such an act?

Because she was hiding a deep, dark secret from everyone. Chely Wright was a lesbian.

Country music is so popular in the heartland because it espouses the same values as the majority of the people who live there: God, family, and country. Half the songs on mainstream county radio could be played on Christian stations. Any mention of homosexuality is not tolerated. And this was, and is, especially true in Nashville.

Chely admits that she knew she was different as a young girl, but that she spent the better of life trying not to be gay.

When she moved to the Music City in early 90s, she knew that if anyone found out about her secret that she would never get her shot at stardom. So she publicly dated men, including some fairly high profile artists like Brad Paisley, hoping against hope that she’d really fall in love with one of them. However, she was still more attracted to women and usually had some kind of secret relationship that she hid from the prying eyes of the press and her fans.

Like Me details Chely’s life, from her hard childhood in Kansas, to her first few singing gigs, her stop at Opryland, to her number-one single and numerous awards. Her tone is very conversational, but she pulls no punches when describing how her father would get drunk and beat her mother, or how she felt as the love of her life demeaned her increasingly successful career. She even has a few words for the Nashville music scene as she discusses the prejudices that are still in place in an industry renowned for its family-friendly practices.

By being the first person in country music to come out of the closet, it will be interesting to see what happens to her fan base. Of the possibilities, Chely says:

"I have no idea if or how many of my fans will support me in my journey from this point forward, and I have no idea where I might find my audience. I am a musician and a songwriter. I have dedicated my life to performing for an audience, and my work has paid off. I don’t know what will happen, but I am at peace with the uncertainty of it all."

That’s pretty hard to argue with.