ME: A Novel (Translated by Charles De Wolf) 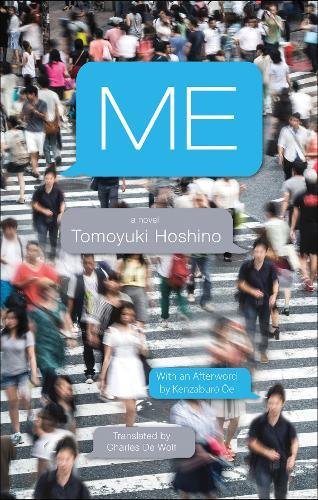 Tomoyuki Hoshino, born 1965, is one of Japan’s more compelling younger writers, but he remains virtually unknown abroad. Translator Charles De Wolf and Akashic Books now help to remedy this with Hoshino’s award-winning novel ME, originally published in Japan in 2010 under the title Ore ore.

The imaginative story of a rather unimaginative camera salesman, ME features Hitoshi Nagano; his troubles begin with his impulsive theft of a cell phone from another customer at a McDonalds. They end with a post-apocalyptic future for everyone in Japan.

ME can be read as an allegory for the lives of that listless, ambitionless generation of Japanese young people we are told distinguishes the economic juggernaut postwar Japan once was from the failed nation it is now, after decades of economic stagnation and catastrophes both natural and manmade. The time frame of the novel is unclear—Nagano has a Walkman and a cell phone—but it is surely set in Japan’s extraordinarily discouraged present-day moment in history.

His saga narrated in Hoshino’s workman-like prose, Nagano soon finds his identity duplicated and exchanged with an increasingly number of strangers who at first physically resemble him but, in time, as the “proliferation” “accelerates,” come to include the whole world. As indicated by the inordinate amount of time he and his fellow “MEs” spend in MacDonald’s—“MacDonald’s was my true home,” “a sanctuary”—his life is dull, routine, and unfulfilling, a series of riding and changing trains here and there only to have unsatisfying encounters wherever he is headed.

“[T]he other MEs were no different from me, or rather, we were all the same,” Hoshino writes. “Like me, they didn’t know where to go and were unsure of their identity.” Passages such as this may mark the novel as a familiar chronicle of adolescent angst, except these people are not teenagers—they are grown-ups, albeit stalled like children in what Nagano comes to recognize as an exit-less “farce” played out in the endlessly rote schedules of first family, then school and finally work.

Like most Japanese fiction chosen to be translated today, ME is quirky. People turn into animals (Nagano becomes a sardine at one point), have supernatural powers, and eventually descend into cannibalism.

In an afterword written by Nobel laureate Ōe Kenzaburō, who awarded the novel his eponymous prize, Ōe praises Hoshino because his work reminds him so much of the Absurdist fiction left us by his late friend, Abe Kōbō.

But ME is not, in the end, any new incarnation of Face of Another or Woman in the Dunes. Abe’s novels were philosophically absurd with lessons for us in the real world. In contrast Hoshino’s ME is simply nihilistic, with a rushed and unconvincing quasi-happy ending appended to it. People die—are murdered—in Hoshino’s novel as a society made up of none but other MEs becomes unmanageable. But death has no power to affect the reader because we have no human attachment to the human replicants that run wild over an already demoralized Japan. There is, in other words, no alternative to the lives and demises of Hoshino’s people.

The story would be a cautionary tale, except for that we don’t know what else anyone could possibly do. In some of his earlier novels, unfortunately not translated, Hoshino—who unlike most Japanese writers had a cosmopolitan upbringing (he was born in Los Angeles and lived in Mexico)—was far more serious and perceptive in interrogating the rules in modern life that bind us only to extinguish our spirit. But ME reads like some kind of fairy tale, like the one in which a princess kisses a frog and makes him a prince, though here it is closer to the other way around. Unfortunately Tomoyuki Hoshino’s ME may add to the overseas readers’ impression that contemporary Japanese fiction is inevitably not for adults, but for our high-school children who have always found it difficult, sometimes impossible, to find a place they belong. But in real life, as we know from our own experience, they eventually do, and that is where the actual story begins.

John Whittier Treat's most recent book is the novel The Rise and Fall of the Yellow House. He is Professor Emeritus of East Asian Languages & Literatures at Yale University and has also taught at Univesity of Washington, Berkeley, Stanford, Texas, Seoul National University, and Ewha Womans University in Seoul.