Me and You: An Enchanted New Take on the Goldilocks Story 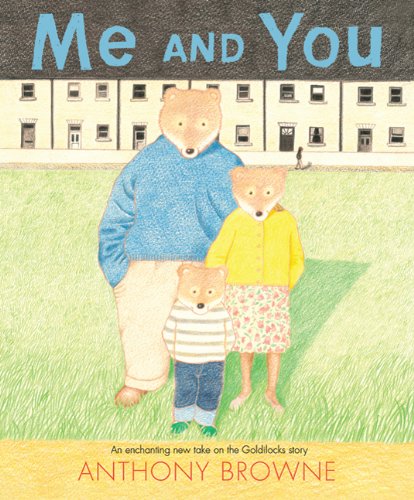 The Story of Goldilocks and the Three Bears has been around forever. In Me and You, Anthony Browne offers his take on the old tale, told from Baby Bear’s viewpoint. The porridge Mama cooks for breakfast is still too hot so the bears go for a walk. But the reader gets to eavesdrop on Daddy and Mommy’s conversation and learns they talk about work, the house, and the car while Baby Bear messes around.

No one wants to take the blame for the front door being left open. Strangely enough, spoons are left standing in the bowls of hot porridge, except one bowl is empty, one chair has been broken, and someone is asleep in a bed. The intruder wakes, frightened by the three angry bears. She dashes home, but Baby Bear stands at the window wondering what happened to the previous occupant of his bed. He watches her running away with a wistful expression.

Now Browne gives us another viewpoint. Who is the girl with a hooded sweatshirt covering her yellow hair? In a series of sepia colored illustrations, almost like film negatives, the author gives her a life. She lives in the ”projects.” While her mother is window-shopping she becomes lost chasing a balloon.

She happens upon a cheerful yellow house with an invitingly open door. Who could resist? Exhausted from her “where am I” adventure, she takes a nap in the most appropriate bed. We get only a glimpse of the golden-haired girl finding her way home in the rain and snow to her own mommy, who is thrilled to see her.

Anthony Browne began his career designing greeting cards, although he intended to become a painter. He has more than forty titles to his name. In 2000, Browne was the first British illustrator to win the Hans Christian Andersen award for his contributions to children’s literature.

True to Browne’s tendency to create unusual and memorable books, Me and You is quite different from the traditional Goldilocks and the Three Bears.