The McAvoy Sisters Book of Secrets: A Novel 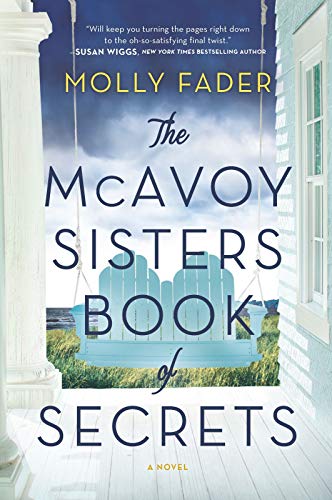 Sixteen-year-old Brin Collins believes her life is falling apart. It all began when Delia, her mother got pregnant. The two had once been close, but in the four months since her sister Ephie's birth, Delia has no time for Brin, and she also is dealing with post-partum depression and strain. Longing for attention, though it's negative, Brin rebels and gets in trouble when she allegedly tries to steal an expensive watch from a jewelry shop.

Brin, Delia, and her dad Dan live in Port Lorraine, a small Ohio town on Lake Erie. Her folks single-handedly run Delia's parents' store, McAvoy Bait, Fish, and Lunch Counter leaving them exhausted. Additionally, Delia's world is shifting around her due to her tremendous responsibilities and her mom's recent stroke, resulting in symptoms of dementia.

Meredith raised Delia and her sister Lindy by herself after her husband was lost at sea. The girls, once inseparable, shared hopes and dreams and everything in between. They kept a "book of secrets" in the night table between their beds where they'd write things to each other rather than talking, so they wouldn't wake their mom.

As a teen, Lindy, known as the wild sister did not care what people thought of her. She only wanted a good time, and she made sure she did. Meanwhile, the conservative Delia worried about Lindy and her disturbing ways. Things came to a head between them with a terrible argument causing Lindy to leave. Now 17 years later, the sisters, in their mid-thirties, are still estranged.

Garret Singh, the Port Lorraine police chief, who, as a boy had a huge crush on Lindy, phones her after he finds Meredith walking aimlessly:

"'. . . I found your mom walking down the spit to the Fulbright House with a flare gun. She was clearly confused. Disoriented."

"Lindy started kicking her clothes into a pile, searching for her purse. Keys. Dammit. 'And what about a stroke?'

"And Delia didn't even call her? Not even a message on Facebook or a text? It was easy not to be surprised. Impossible not to be crushed."

Lindy's current circumstance proves fate is intervening and calling her home. She will help Meredith, and when her mom is stable, she will leave again. There is nothing in her old town for her.

Meredith is overjoyed when Lindy arrives, and Brin is eager to learn about the aunt she never met; the one that is never mentioned. Imagine her shock when she meets Lindy and glimpses an older image of herself. This makes her wonder —why does no one ever talk about Lindy? Why did she leave? Speculation runs through Brin's mind, mostly of terrible thoughts.

Lindy is shocked when she first goes to the store—the very business she was supposed to take over and for which she had big plans. Most items on the shelves are out of date and dusty, the paint outside is chipping, and everything is in  disrepair. How could Delia let this happen? But Lindy's not allowed to criticize for Delia and Dan have single-handedly run the business along with raising a family.

Meredith often mistakes Brin for Lindy, especially when she becomes "brain fogged" or under stress, which happens a lot. One night in particular, when she can't sleep, she drags out old picture albums. Brin, wanting to know what happened between her mother and Lindy, hangs around at Gran's house. Fascinated by the photos, she asks for answers she doesn't get, but Lindy does mention how Delia dreamed of going to Europe with Dan then going to college to become a teacher—both of which never transpired. She also wonders why her grandmother seems to be obsessed with the old Fulbright house—the now abandoned mansion located on a spit of land where the local kids go to drink and party, a place Delia avoids at all costs.

Tension still weighs heavily on the siblings and Brin becomes more frustrated as time passes. Why is everyone in her family so secretive? She's almost an adult, why won't they tell her things?

Each of the four female characters offers their own voices in separate chapters  confirming  their pain and the confidences withheld as they come to grips with the past and how it will impact their future. With mystery and suspense, ambiguity abounds resulting in more questions than answers up until the unexpected conclusion.