Mathematics Without Apologies: Portrait of a Problematic Vocation 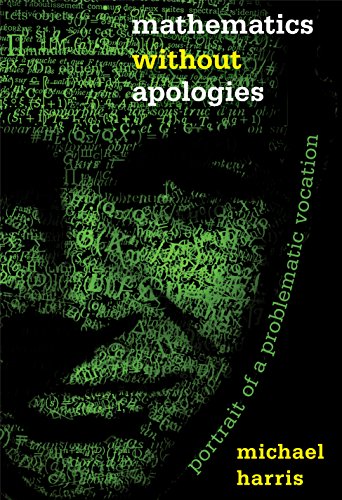 The preface of Mathematics Without Apologies is certain to discourage readers that are expecting a “popular” mathematics text from reading further. Discouragement comes from Harris’ style, which tends toward exactness and preciseness, provided without context. Readers may be, as this reviewer was, confused as to meaning. Harris knows what he is talking about, but we do not.

What may be of interest to those who appreciate unintentional humor, Harris repeatedly claims that Mathematics Without Apologies is not an autobiography, and just as repeatedly provides autobiographical material.

In the same vein, Harris repeatedly claims that Mathematics Without Apologies is not a moral tale and just as repeatedly, moralizes. Given that Mathematics Without Apologies appears to be a non-autobiographical autobiography with non-moralizing morals, Harris’ reflections and morals albeit unintentionally, provide perhaps the best and most interesting parts of the book. The question is, for a curious reader, is as to whether Harris is simply being ironic or incapable of understanding how he comes across.

Another issue this reviewer has with Harris’ expository style is his tendency toward, when not being overly precise without context, conveying ideas through a stream-of-consciousness style, and stream-of-consciousness without context, becomes no more than stream of non sequitur. One might be reminded of a less weird, though still weird Naked Lunch. At one point, this reviewer believing himself to be confused from overtiredness, put the book down to start fresh the next day. Sadly the next day, Mathematics Without Apologies continued to not make sense.

On the other hand, Harris does provide introductory material on number theory that is coherent and well explained, with context. By focusing on the mathematics and not on how Harris does mathematics these sections can be understood by an interested non-expert.

And almost in spite of himself, Harris also makes clear a number of his opinions on the environment of “doing” mathematics:

And on “doing” proof:

Chapter “beta,” (no kidding—the chapter uses the Greek symbol beta as its number) offers a conversation between a number theorist identified as “NT” and a performing artist identified as “PA”, which is reminiscent of the playful-serious conversations that can be found in Gödel, Escher, Bach by Douglas Hofstadter. Harris provides a number of such conversations, and they are worth reading as they point out the cultural disconnect between a mathematician’s and a non-mathematician’s understanding of mathematics.

Chapter 5 offers Harris’ analysis of mathematics imagery in several of but not all of Thomas Pynchon’s novels. (Why not all? Harris’ admits to not having read all of Pynchon’s works, and this reviewer wonders, why admit to this?).

Chapter 6 offers Harris’ analysis of mathematics and mathematicians in movies and popular culture, and at the end of this chapter, this reviewer gives up. Giving up is not meant to be a criticism of Harris’ mathematical abilities, just this reviewer’s opinion that some authors are not cut out to write books on popular mathematics.

Overall, the good parts of Mathematics Without Apologies do not redeem the book as a whole. Harris’ efforts would have been of greater value if instead of trying to explain how hard it is to write about mathematics, he just did more mathematics.