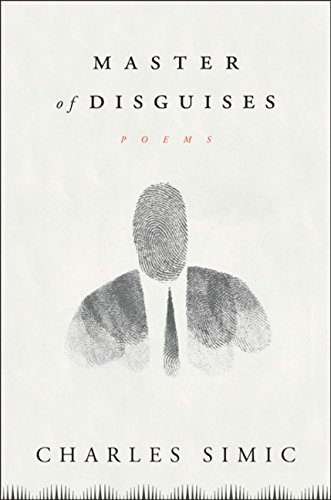 This is the latest book by the “shuffling old man” of poetry, Charles Simic. And it is terrific. It’s divided into five sections of 52 poems—a poem a week for a year—and it deals with a serious issue.

The “master of disguises” relates to the various forms that death takes in our world as the poet has encountered them. In Simic’s verse, the omnipresence of death is uncovered in a comprehensive and matter-of-fact manner. It’s a work that reflects not only the author’s concerns in his old age, but also the times in which we live. That death is a part of life is what Simic so effortlessly and wondrously conveys in this collection. That sounds funny, but it’s true.

Writers are fixated on this particular subject and for good reason. Seamus Heaney’s newest book, Human Chain, contains many fine elegies. He wrote it after a stroke. Jose Saramago, who recently passed away, wrote Death with Interruptions after experiencing complete organ failure. On what he thought was his deathbed, John Donne wrote his famous “Meditation” that so inspired Hemingway years later. As I Lay Dying, Faulkner’s little gem, unsentimentally describes the Bundrens’ foolishly-fateful odyssey as the family tries to bury its matriarch who rots in her coffin for too many days as the buzzards fly overhead. Do you hear that fly buzzing? The one Dickinson heard long ago in Amherst, MA, and which continues to buzz to this day?

It’s not really writers but, rather, the subject of death itself that demands attention. It’s so inevitable. It’s waiting patiently just at the end of the road. Sometimes it’s even closer than that. It makes one think of Breughel’s Triumph of Death. Watch out! And Simic’s imagination, the “devil’s helper,” is so good that one is amazed by his treatment of the subject.

In the pages of this work one encounters crows, trees, leaves, puppets, doomsday preachers, old men, women, baby carriages, boats, Edgar Allen Poe, a toad, and various flowers strewn along the path in life toward death. The fourth section in this collection is one long poem in eleven parts titled “The Invisible.” It’s quite an achievement as a sustained-coherent piece. It’s worth the purchase of the book for that poem alone.

Many of the pieces deserve some comment; however, “Old Soldier” requires a few words here. It contains a number of elements that exemplify the whole. It is the first poem in the second section of the book. What’s so compelling about it is that Simic connects the imaginative play of a child to real-world violence. The first stanza is full of pretend fighting, killing, and suffering as the speaker reflects upon his world at the age of five. It’s what little boys do as they play or, at least, some do.

The second stanza introduces the reader to the harsh realities of the boy’s historical context. “After the bombing raid, the sky was full / Of flying cinders and birds.” That image is immediately juxtaposed to the flowering “cherry trees” in the garden to which the boy’s mother takes him after the raid. In the garden, there’s a cat whose tail the boy wants to pull. He doesn’t, though, because he’s too busy swatting flies with his makeshift sword. Near the poem’s end, the boy wishes for a horse. Any one will do, even the one pulling the hearse, waiting for the bodies of the dead to be loaded in their coffins to be carted away.

This is just one of the poems, but there’s a particularly brutal and relevant truth in it. Just as there is truth in the other poems as well. The boy’s imagination and the real-world conflict mutually reinforce each other—art imitating life / life imitating art.

One, unfortunately, doesn’t have to go out of his or her way to see this today. Look at the front page of The New York Times for October 8, 2010. There’s a color photo in which one sees a little boy. Actually, there are three of them in the photograph; yet, if you focus on the one in the foreground, you’ll see that he’s sitting on a cart. He’s living, not dead. What immediately catches the eye, though, is the bright, red blood covering his head. He’s a victim of a bombing raid in Karachi, Pakistan. He’s not crying; rather, he’s looking down toward his left while leaning on his hand. Who knows what’s captivating his attention, his imagination? What’s quite apparent to us, though, is the violence of his world. His life. An “old soldier.”

Most of the other poems in the book aren’t as political or rooted in historical conflicts as that one. What Simic does is to take everyday and ordinary objects and situations and relate them in some simple fashion to his subject—the various guises of death in the world. Unfortunately, the kind of violence depicted in the aforementioned photo is everyday and ordinary. About the subject, Simic is dispassionate. He conveys what he’s observed in a straightforward manner.

Death, therefore, just is. It’s not anything to be afraid of. On the contrary, it’s something we’re all acquainted with. Death then is an intricate—natural and organic—part of the fabric of the scene that Simic paints throughout the work.

That’s why these poems have so much power. That’s why we recognize our mutual acquaintance in them as well.

Robert Winkler is an experienced educator of literature in California who possesses advanced degrees in divinity and theology.