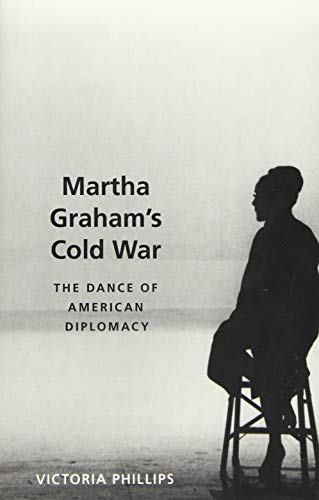 Between 1955 and 1989, legendary choreographer-dancer Martha Graham and her company made a series of international tours under the aegis of various government agencies and government-supported foundations and organizations. She and her choreography were presented as uniquely American as well as a sign of America’s embrace of an apolitical modernism that reflected the country’s cultural freedom and aspirations, the art of the New World.

Graham was feted by presidents from Roosevelt to George H. W. Bush and forged close friendships with a number of first ladies from Eleanor Roosevelt to Barbara Bush. First Lady Betty Ford had briefly been one of Graham’s students. While Russia sent the Bolshoi Ballet on tour with examples of Russian classical style, Graham exported modern dance using the abstract sculptural sets of Japanese-American Isamu Noguchi and set to the music of American composers including William Schuman, Samuel Barber, and Aaron Copland, whose score for Graham’s Appalachian Spring became one of the most beloved American classics.

Appalachian Spring was the most famous example of Graham’s works celebrating Americana. Her repertoire also featured more mythic works centering on female protagonists including Medea (Cave of the Heart), and Jocasta (Night Journey), from classical literature and the mythic-historical Joan of Arc (Seraphic Dialogue).

Graham claimed to be a devotee of abstract modern art, particularly the work of Kandinsky, but her work also showed the influence of Freud. Her pelvic-centered technique emphasized sexuality. While she was famous for her long dresses, her men were often scantily clad. Graham was influenced by Isadora Duncan and Ted Shawn, pioneers of American modern dance, but she also claimed Asian influences, which was useful on her government-sponsored tours of Asia.

From the beginning, her company was racially and ethnically diverse. On tour, she insisted that her dancers appear in public dressed like proper ladies and gentlemen. Graham was adept at charming powerful ladies at tea parties and promoting her company with powerful men. She was politically astute, as when in the late 1980s she presented Soviet defector ballet stars Rudolf Nureyev and Mikhail Baryshnikov in a gala performance of “Appalachian Spring.”

Martha Graham’s Cold War is an exhaustive study of Graham’s government-sponsored international tours. Using Graham’s papers housed in the Library of Congress, government documents, and interviews with dancers (the author was once a Graham dancer), Victoria Phillips chronicles the political, technical and artistic aspects of each tour in light of the political climate in every country at the time Graham visited and well as critical and audience reaction to the performances. Graham’s tours offered audiences abroad a sample of her work.

They were also propaganda, a demonstration of a distinctly American art that could only be nurtured in the “land of the free.” Her first tour of Asia and the Middle East in 1955 took place when a number of Asian countries were considering breaking away from American influence. Graham was sent to countries where our government feared Soviet influence might prevail.

In her introductory chapter, Phillips presents a detailed account of how Graham’s work in the 1940s offered a distinctly American approach to the performing arts. Her work was uneven but at its best, as in Appalachian Spring, the work showed that American artists could create high-cultural works that would be recognized internationally. It was no surprise that shapers of American foreign policy like George Kennan could see propaganda value in sending Graham and her company abroad. The following nine chapters offer highly detailed accounts of each of Graham’s tours.

By the 1980s, Graham’s age and her problems with alcohol caused problems for the dancers and tour planners. The critical reception of her works was often mixed. However, the tours were necessary for the image and financial stability of the company. Moreover, by the 1980s, some critics saw Graham’s work as relics of a past era. There were other more exciting contemporary American choreographers and troupes. Graham died in 1991: her usefulness to American diplomacy ended two years earlier with the fall of the Berlin wall.

Unless you are a dance historian, an ardent devotee of Martha Graham, or are particularly interested in Cold War history, you might find that Phillips gives you much more detailed information about Graham’s tours than you need. The 296 pages of text are accompanied by 130 pages of scholarly apparatus. There are also 24 pages of photographs.