Marooned: Jamestown, Shipwreck, and a New History of America’s Origin 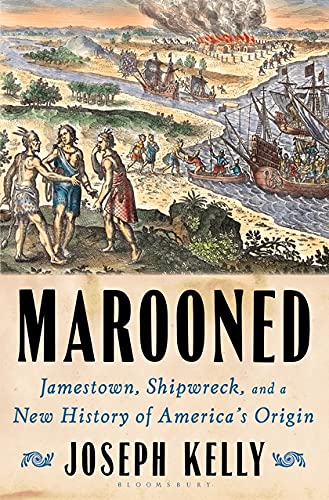 "Despite the volume of this book and its controversial interpretations, it makes a fast easy adventure in reading. It includes the familiar such as John Smith but so much else."

The founding of European America began with more than planting the flag, meeting the natives, and living happily ever after. In Marooned, author Joseph Kelly explains that for America "the most important modern myths narrate the nation's founding."

Kelly questions, as so many have, if "the Pilgrims' experience defines America."  He answers with a detailed history of the English settlements that predated it. "Jamestown has long competed with Plymouth as our origin myth."

The author goes far beyond exploring that debate. Although "at least five significant books have come out since the 2007" 400th anniversary of Jamestown, Kelly offers a new interpretation from the view of the common men, misrepresented as "idle, lazy, sensuous, given to drink and greed, mutinous in thought and deed."

Marooned tells a lost history of change in America in different ways, including the shipwrecked in Bermuda who had four unsuccessful mutinies to avoid going to Virginia. "The settlers in Jamestown suffered prisoner of war syndrome," Kelly writes not from siege by the Indians but from the Old War order in the fort preventing their escape to the woods.

Kelly writes of that these men "wanted to maroon themselves in the wilderness" and had "no fewer than fourteen separate uprisings" in the first years of Jamestown. They brought "the origins of the democratic virtues" to the New World. Stephen Hopkins, one of these rebels, "whispered the same ideas that Thomas Jefferson later immortalized in the Declaration of Independence."

"American ideals did not begin with a covenant between God and his chosen people" at Plymouth Rock but "Americans are castaways, maroons" at Jamestown and Bermuda. The author compares these self-exiled to the cimarron, the wild escaped cattle of Spain from which the English made the word maroon.

"England's first encounter with the wilderness" was Ireland and that shaped its view of treatment of the Indians and the common men who became their settlers. The army in Ireland "wet, cold, hungry, and scared" lived in castles "safe from the natives" but for the non-soldiers an experience identical with the later Virginia settlements, including sickness, mutinies, and desertions.

The Native Americans around Jamestown "treated the deserters well, feeding them, housing them, and welcoming them into the circle of village of life." English common men saw the Indians as "collaborators, benefactors, a way out of the hell" of the harsh theocracy and aristocracy inside the fort at Jamestown.

"Those who deserted the fort did not see the Indians as devils, nor did they see themselves as God's chosen people." These indigenous people "lived a life that was free, equal, satisfying, magnanimous, brutal, and short."

Not living in a wilderness, these people created "unnatural forests" that "flourished because Indians were managing the forests." The Indians had a Stone Age technology but were shrewd strategists of survival and, at times, "guns and tools were continually smuggled out of the fort."

"Later Europeans did encounter genuine wilderness, but that was because early contacts annihilated nearly one hundred million Native Americans." "Whenever Indians suddenly disappeared from a region, the ecological structure collapsed, disorganized itself, and entered a riotous period with natural selection struggled toward a new equilibrium."

Inside the fort at Jamestown, the "gentlemen would rather starve than work." They "did nothing but fight over who got to give the orders. These aristocrats could not "see Indians as anything but the devil's party."

Despite the volume of this book and the controversial interpretations, it makes a fast easy adventure in reading. It includes the familiar such as John Smith but so much else. Solid scholarship, Marooned has an extensive bibliography, documentation, and illustration.