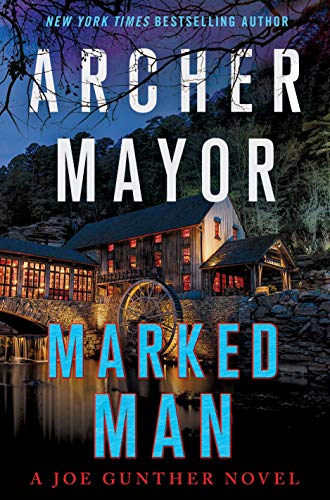 Series crime fiction falls loosely into two formats: the continuing adventures of a central character and his/her team, and an ongoing scenario populated by a revolving group of characters. In common they have one or more cases resolved per episode and a strong focus on place.

The Joe Gunther VBI series set in Vermont has moved back and forth between the two formats over 32 volumes, sometimes combining them, as in Marked Man. This story, instead of focusing solely on Joe’s team at the Vermont Bureau of Investigation, delves deep into the first murder victim’s backstory in Rhode Island and how that leads to more killings in Vermont.

“This is a book bursting with characters,” the author notes in his Acknowledgments, “covering two New England states, and spanning several decades—a lot of moving parts.”

So many moving parts, in fact, that family tree diagrams are inserted into the narrative to help readers keep track of an extremely dysfunctional family’s cross-pollinations. Even with those visuals enhancing the text, it’s challenging to keep track of who’s who and what’s what.

The author guides us neatly, showing how an investigation can be triggered by the smallest anomaly then blow up in myriad directions. Soon it becomes clear that the marked man is a former Mob associate from “Little Rhody” who gets embroiled in affairs that go bad, so he retreats to Vermont, changes his name, and builds an empire.

He is a pathological control freak, obsessed with family, and ends up housing all his relatives in an extravagantly converted mill in Brattleboro: “a proletarian factory version of a buffed-up Louis XIV castle—a complete and utter paradox of form over function.”

Here he blackmails his family into cohabiting in lifelong luxury, while he psychologically twists them under his thumb.

He lives to great age and appears to die of natural causes. But then a medical student working on his cadaver discovers a detail that changes the official cause of death to homicide. Thus Joe and his team are called in.

Their part of the story reflects the central-character-plus-team format. All of the established VBI players are involved, with each handling a line of investigation. Additionally, characters introduced during the series—an investigative reporter (daughter of Joe’s lover) and a private investigator (daughter of a former criminal from an earlier volume)—pursue lines of their own that eventually tie into VBI’s investigation.

At the same time, the story introduces characters who have pivotal roles pertaining to the marked man but who will likely never reappear in the series. They are part of this volume’s scenario only and provide the links between threads.

The narrative viewpoint switches back and forth, round and round, among them all. Sometimes this is frustrating, but it brings readers directly into each point of action and discovery. They share key experiences with whichever character something happens to, rather than having the information related secondhand by a single character. Then the VBI puts all the pieces together.

The technique works, though it makes for an uneven continuum. The author’s skill, however, prevents it from being choppy. This is impressive when you realize not only how many characters are involved but also how many different elements of crime investigation are at play: detection, politics, media, medical, forensics, human affairs, and the labyrinths of society in two dramatically different New England states.

The mixture gives this series its quality and appeals to many different types of reader. The only ones who may be disappointed are those who follow the series exclusively for Joe and the VBI.

The story inevitably converges to the only possible conclusion despite the plethora of suspects. Some readers might spot the true killer early, but the rest of us will be surprised by whodunit, revealed almost at the last page. The effect is a satisfying intellectual mystery. The kudos the author has received over the years remain valid for this latest offering. There’s nothing series readers like more than a new episode about great characters from a reliable, informative, masterful writer!