The Mark Inside: A Perfect Swindle, a Cunning Revenge, and a Small History of the Big Con 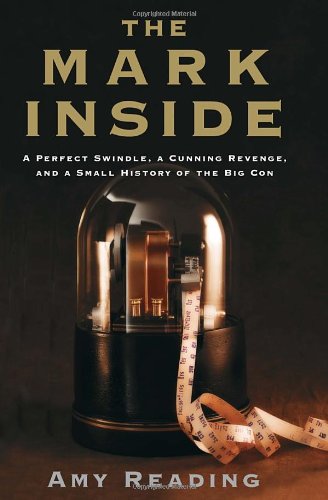 “Ms. Reading’s telling of this story, enmeshed in the history of American identity formation, is a tale for children of all ages.”

Ever wondered how a confidence game is pulled off? The Mark Inside details the stages of how a con is perpetrated. This story of a mark who enacts revenge makes for an entertaining read, grounded in detailed historical analysis, about a crime that became emblematic of various American institutions integral to our cultural self-identification.

The Mark Inside has layers of con games that are reminiscent of Conrad’s multiple narrators. First, there is the story of Texas rancher J. Frank Norfleet, who is swindled out of his life savings by fraudsters. Then there are the sources for the story (including Norfleet’s autobiography), who engage in the “humbug” made popular by P. T. Barnum—a scam that became such an essential part of American history, culture, and financial development.

And finally, we are conned by the author herself. She engages us in a fascinating story of crime and punishment, and as she admits in the small print of her book title, she manages to weave in a small history of the confidence game in America.

After giving the author our confidence, and following her most willingly through a compelling narrative, we find ourselves at the end of the story in unexpected surroundings, with the carefully constructed scenery giving way to a post-modern depiction of American history. Against our better judgment, we have just experienced a semiotic analysis of the gradual transition of trust, community, and the economic development of the American West to 20th century finance and our suspension of belief at the circus freak show that is modern Wall Street.

Norfleet was a character and American icon, but one we can hardly imagine in today’s world. He worked from a very young age in a solitary ranch, eventually staked his own claim, and became a successful rancher. He was the model of a self-made western man, with no small amount of support from his spouse who shared his isolation and hardship.

In 1919 Norfleet was 54 and arrived in Dallas to conduct business. He was identified as a mark by a well-organized gang of confidence men, and taken for all of the savings he and his wife possessed—in addition to $45,000 for which he had gone into debt. Translated to the purchasing parity of the present, that was worth more than $560,000.

Unlike many people who were cheated, Norfleet went after the men who had fooled him, and then spent much of the rest of his life pursuing other gangs of con men. The culmination of his efforts was in Denver, where a gang had basically run the city. In a strange set of circumstances, an honest Attorney General was elected and decided to go after the criminal organization. Norfleet played a central role, pretending to be a gullible mark, and then testifying in trial against the 20 defendants rounded up, which makes up the interesting climax of the story.

Confidence schemes go back to at least 1849, when a man in the streets of New York City began asking strangers “Have you confidence in me to trust me with your watch until to-morrow?” Within a few days, several men had been scammed out of their gold watches. It coined a new term for an old and quintessentially American form of crime.

Impersonation and scamming is ancient, and it certainly did not start in America. But it became a peculiarly American crime, precisely because it was so crucial to the formation of the American identity. Both the development of the West and the start of New York financial markets involved taking extreme risks. The pioneers of both were barely distinct from P. T. Barnum’s exploitation of the public’s willingness to believe in wondrous possibilities.

Norfleet was a character of the West who played an iconic role in exposing those who preyed on gullibility. And Ms. Reading’s telling of this story, enmeshed in the history of American identity formation, is a tale for children of all ages.