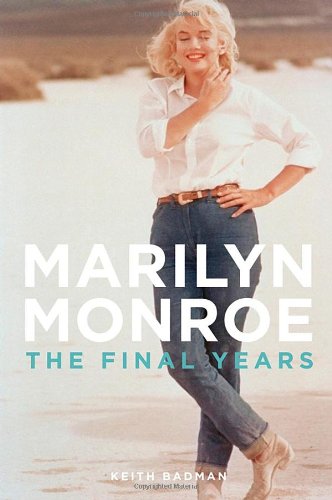 “Mr. Badman, for all his years of research, seems to have some issues with the ‘fact from the fiction, the truth from the lies’ parts.”

Apparently, everything you or I know about the mysterious circumstances surrounding the death of Marilyn Monroe (now some 50 years ago) is wrong wrong wrong.

And apparently Keith Badman, author of Marilyn Monroe: The Final Years, is just the guy to explain it to us once and for all.

As Mr. Badman puts it:

“After five years of exhaustive research, and after examining every surviving scrap of evidence, scrutinizing each piece of medical data, listening to every relevant interview, reading all applicable transcripts, devouring each newspaper report, watching every program, and after distinguishing the fact from the fiction, the truth from the lies, I firmly believe that I can finally answer the five-decade-old mystery about how Marilyn Monroe, the world’s greatest film star and sex symbol, tragically died. . . .”

Which is all well and good. And yet having read Marilyn Monroe: The Final Years, I can state simply that Mr. Badman, for all his years of research, seems to have some issues with the “fact from the fiction, the truth from the lies” parts.

No other book in the recent slew of works promising to at last reveal the “true” cause of the film star’s death has come up with a narrative that all at once completely distorts both the activities and the supposed motivations of the key players surrounding the events of August 4 and 5, 1962.

Those somehow involved include actor Peter Lawford, singer Frank Sinatra, U.S. Attorney General Bobby Kennedy, and mobster Sam Giancana, along with the maid who was secretly a psychiatric nurse, the corrupt Los Angeles police department, the inept psychiatrist, the distant-yet-threatening POTUS, the dimwitted thoroughly evil staff of the Cal-Neva Lodge, as well as various other Sinatra and/or mob underlings.

The book utterly fails—for a moment, a single phrase, a declarative sentence—to conjure the spirit of Ms. Monroe, despite the fact that it is for the lingering love of her that most of us gather, book after book, in remembrance of and in hopes of gleaning some new insight, some fresh information.

The one real tidbit that we do get here is that apparently (yet again) there is a thriving cult of those who both study the death of the actress and write books about it and about the events of her “last years.”

Mr. Badman (Could any novelist have given the author of this odious work a better name?) refers to them again and again simply as the “Marilyn Scholars,” as if they had degrees from Yale in Marilynology. (Most books on the death of Miss Monroe prominently feature gilded quotes of praise and wonder all written by authors of other books on that same tragedy, which no doubt themselves feature similar quotes, tending to support the idea of a thriving subculture of Marilyn-ists among us.)

Thus, when Marilynophile Keith Badman tells us for example that Miss Monroe, in her final confrontation with Bobby Kennedy, was not demanding why he had treated her so badly (historically, she has been quoted again and again by many sources as shouting that she felt as if she were treated by both Kennedy brothers as “a piece of meat”), but instead “Marilyn was actually trying to contact Bobby to warn him about a possible assassination plot,” he is speaking from a position of great authority.

Here the author is also tipping his hand where one of the great cultural memes of the last generation is concerned: the involvement of Marilyn Monroe and those Kennedy brothers.

The Kennedys, according to Mr. Badman, were good men, noble men, and, on top of it all, nice men. Therefore, it is not true that JFK and the film siren carried on a long relationship (some texts suggest that they first met in 1946 when Kennedy, then still single, traveled out to Los Angeles to visit a friend of his father, Joe Kennedy—who had had a famous liaison with actress Gloria Swanson—in order to sample the various treats that Hollywood had to offer) filled with hot sex and late night phone calls.

Instead, Mr. Badman tells us they had a one-night stand and Kennedy, due to his chronic lower back pain, failed to satisfy the actress, who then quickly became disinterested (after calling her own masseur while the couple still dawdled in bed in order to ask how best to massage the President’s back in order to give him some relief).

And Bobby, as a good and humble man, totally resisted the siren. As Mr. Badman reports:

“Although it is safe to say that the Attorney General did grow closer to Marilyn than his brother, John, extensive research on my part involving their personal schedules proves that Bobby did not have a fully fledged affair with Marilyn.”

Later in the book, the author seems to change his mind and suggests that the two did have a sexual relationship, but never mind.

He did apparently (that word again) fall under her spell to the point that he told her all about the plans for the Bay of Pigs invasion of Cuba and according to newswoman (and early television game show regular) Dorothy Kilgallen “privately divulged to her details about a UFO crash in New Mexico and how he had visited a secret air base for the purpose of inspecting dead alien bodies from outer space.”

Thus it seems that Mr. Badman came into his research with his conclusions drawn.

And his ultimate conclusion as to just how the actress’ death came about, coupled with the various other of the book’s “revelations” (among others that Frank Sinatra himself knew nothing of the drugging and raping of Monroe at his Cal-Neva Lodge during the last weekend of July 1962, although the photographs recording the event supposedly for the purposes of blackmail were indeed taken with Sinatra’s own camera) and the motivations he ascribes to various persons will likely lead to wall damage in bedrooms and living rooms all over the free world as readers fling the book as far away as possible before damage to their eyes and/or brains can occur.

The question is: How good a research journalist is Kenneth Badman?

The answer may come from a single anecdote in his book.

Early on in his text, Mr. Badman recounts a journey to Mexico taken by Miss Monroe in February 1962 for the purposes of buying furniture and art for the hacienda-styled home she had just purchased in the Brentwood section of Los Angeles.

In a passage of little more than a single page, the author manages to misspell the names of the towns visited (Coyoacan, not Coyoagan, for example, which is easily checked), misspell the name of the designer she visited, and to miscredit that designer for objects he never designed.

This seems a small thing, to be sure, but in a book supposedly been scrupulously researched, supposedly cleaving completely to reality, in which the author again and again makes “Geraldo”-ish comments such as “Now I can reveal,” if we cannot be dead certain that the author has gotten all the small, easy to verify details right, then how can we believe him when makes the conclusions he does about the death of Miss Monroe—something that requires actual journalistic skill?

For instance, Frank Sinatra apparently discovers that the actress had been drugged, raped, and photographed against her will by mob underlings while visiting his lodge, recorded with photos taken with his camera, and then sent without permission to the press—then promptly blames Marilyn Monroe for the incident because of her fondness for drugs and “although still fond of her, Sinatra was now through with the actress.”

Books like this one—sprinkled with grammatical errors, oddball vagaries, and astoundingly bizarre findings—will make Marilynophobes of us all.