Marie von Clausewitz: The Woman Behind the Making of On War 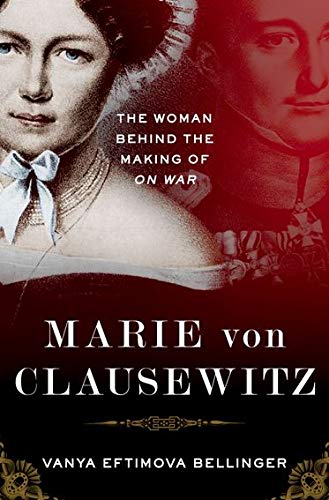 “read this book to truly understand how this dynamic duo formed a loving and unprecedented marriage and intellectual partnership . . .”

To find a book that upsets the natural order of historical thinking on a topic is extremely rare. Since its original publication in 1832, Carl von Clausewitz's magnum opus On War has probably been the most studied volume on warfare, politics, and strategy in the Western world. Praised and pilloried, this volume has been the subject of debate by both scholars and soldiers and continues to draw controversy even today.

Yet although pundits and soldiers have offered numerous critiques through the lens of their experiences since its publication, there has been less historiography of the author or his work, with the exception of a small group of historians such as Peter Paret and Jon Sumida.

Ettimova Bellinger joins this august group with this groundbreaking look at the role Countess Maria von Brühl, the wife of Carl, played in the publication of this book. Using a treasure trove of previously unknown letters and correspondence donated in 2012 by Marie's descendants to the Prussian State Archives/Cultural Heritage Foundation, Bellinger incorporates the complete surviving correspondence between Carl and Marie contained in this collection and other published personal papers to show how this highly educated and politically aware woman influenced On War.

As a romance and marriage, the union of Carl and Marie was an amazing story.  She was from a prominent aristocratic family who practically grew up at the Prussian court of Frederick the Great and his sons. Carl was from a very modest family of dubious aristocratic background, and their courtship was considered highly unusual for societal norms of early 19th century Prussia.

Like many young women of her era, Marie was well educated in order to enhance her marriageability to a suitor. But Marie was also opinionated and an independent thinker, attributes that might have been an obstacle to settling down with a proper husband. Moreover, both of them were considerably older by conventional standards when they were married, Marie being almost thirty, considered far past a suitable marrying age.

In spite of their very different backgrounds, by all accounts they had a loving and strong marriage. One of the remarkable traits of their relationship was that Carl considered Marie more than his intellectual equal, allowing her considerable freedom to aid his own intellectual development on topics such as philosophy and art not considered part of a soldier’s normal course of study.  Although both of them brought much insecurity into the marriage from their childhood and early adult life, they were able to complement each other in a remarkable way and build an intellectual partnership unheard of for marriages of that era.

In addition to their intellectual bond, both Carl and Marie were active in the nascent German nationalism of the early 1800s, and were particularly drawn to each other by their desire to see Prussia emerge from the shadow of Napoleonic dominance of the scattered German states. This teamwork continued through the Prussia defeat in 1806, Carl’s self-imposed exile during Napoleon’s invasion of Russia in 1812, through the reforms and changes to the Prussian military leading to Napoleon’s eventual defeat at Waterloo in 1815.

As Carl began working on On War, Bellinger shows how Marie not only contributed to the content and thought of his work, but after his death, made it her mission to see her husband's intellectual legacy come to fruition.

Marie's drive to edit and publish On War was unprecedented for her day and her willingness to see the project through until her own early death in 1836 showed not only her love for her husband, but her strong intellectual and political spirit.

This is a magnificent work that not only offers Marie's unique perspective of Carl von Clausewitz and how the events of their era shaped his work, it brings out her neglected contribution to the formation and completion of his work.

“Marie never envisioned Carl's influence, while he was still alive or posthumously, to be constrained to the battlefield but firmly believed it should spread into the wider political realm . . . Marie's role as curator of On War advances the idea that the people as rational actors have to understand the most terrible political instrument of all . . .”

High praise indeed. Every serious Clausewitz scholar should read this book to truly understand how this dynamic duo formed a loving and unprecedented marriage and intellectual partnership to create the most studied volume on war and politics in the Western world.