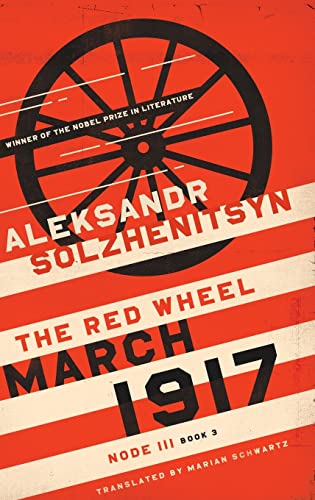 “Moving from staccato reportage to evocative scenes, the book works as a sort of collage of information, replicating in its stylistic choices the different lenses used to understand history. By combining them into one forceful whole, Solzhenitzyn not only gives us an incredibly vivid sense of the different aspects of the Russian Revolution, but a unique model for how to approach history.”

Nobel prize winner Aleksandr Solzhenitsyn chose an interesting way to deal with the complications of history. How do you carve a narrative line out of muddle of chaotic events? How do you find the story in the many historical events happening at the same time period? Solzhenitsyn's answer is to reject the idea of a single linear story. Instead, he presented “nodes.” He explained his reasoning in a 1983: interview:

“The Red Wheel is the narrative of revolution in Russia, its movement through the whirlwind of the revolution. This is an immense scope of material, and . . . it would be imporssible to describe this many events and this many characters over such a lengthy stretch of time. That is why I have chosen the method of nodal points, or Nodes. I select short segments of time, of two or three weeks’ duration, where the most vivid events unfold or else where the decisive causes of future events are formed. And I describe in detail only these short segments. . . . Through these nodal points I convey the general vector, the overall shape of this complex curve.”

And complex it certainly is! The Russian revolution is usually taught as one event leading to another and then to another. The picture Solzhenitsyn offers suggests the chaos on the ground, the contradictory reports flying around. First one thing is said to be about to happen, then another, then yet another. In short staccato paragraphs, Solzhenitsyn energetically conveys the muddle of information:

“The tape started flowing again, not encoded, but not about abdication at all. Pskov was asking, on Guchkov’s instruction, to assign the imperial train a route to GHQ.

Lomonosov exploded. They’ve lost their minds! How can an abdicated despot be allowed to to GHQ? And have the entire army handed over to him? This was another coup!

‘Aleksander Aleksandrovich! This is beyond comprehension! What is Guchkov doing? Inform the Duma!’

Bublikov felt like he’d been scalded with boiling water—and he grabbed the receiver.”

These kinds of impressionistic scenes alternate with longer descriptions that set the background for historical characters and their motivations. After pages of confusion over whether the Tsar is abdicating or not, who the Tsar is naming to replace him, the news arrives that the Tsar has chosen to name a grand duke to replace him:

“Nikolai Nikolaevich was the best of the grand dukes, the only one qualified for the Supreme Command, and his authority was recognized throughout the army. But was he prepared to stand firm? For all the grand duke’s provocatively martial exterior, his prodigiously tall warrior figure, for all his aristocratic appearance, his long, thoroughbred face, the handsome cut of his eyes, and the almost theatrical effect from his many tours in high command—Kolchak, unfortunately, did not sense in him the reliability of an irreproachable ally.”

This kind of writing shows Solzhenitsyn's impressive novelistic skills at creating characters, including those based on real people. This mix of styles makes for gripping reading, placing us in the midst of this whirlwind of confusion. Revolutions aren’t simple and there isn’t a single person in charge. By revealing the history through a range of different characters’ experiences, the events feel personal, many small “nodes” converging into a momentous wave. The dizzying unpredictability of it all is well evoked toward the end of this massive exploration:

“In unfamiliar waters, even the most experienced swimmer is off his stride, swallowing water, and lucky not to drown. The waves at the rear proved to be such that General Evert got utterly lost in them, merely held on to his important look, but had lost his grip on the situation. He had recognized the new government, but that turned out to be not nearly enough for stability. He was still commander-in-chief of the Western Army Group, and was in charge of those three armies and fifteen corps—but in fact nothing remained of his absolute rule. He had not foreseen that a new authority would take shape a few buildings away from him, in Minsk itself.”

The reader is thrown into similarly unfamiliar waters. The reward for straining through all the currents is an incredibly rich view of all the many factors in play in the space of a week, the many elements carrying the revolution forward and the Tsar out of power as different men (and yes, they’re all men) jockey for control. Moving from staccato reportage to evocative scenes, the book works as a sort of collage of information, replicating in its stylistic choices the different lenses used to understand history. By combining them into one forceful whole, Solzhenitsyn not only gives us an incredibly vivid sense of the different aspects of the Russian Revolution, but a unique model for how to approach history.