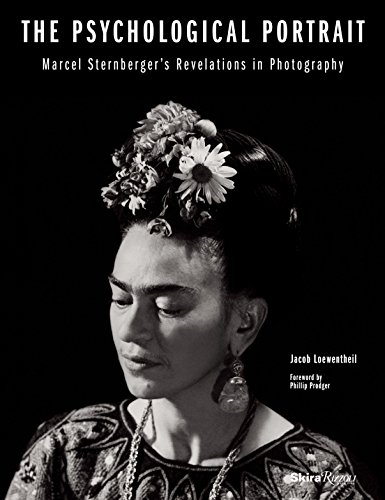 Revealing the true personality of a portrait sitter has always been the challenge for photographers since the early daguerreotypes or for painters over the past 3,000 years. The unquenchable curiosity to distinguish a person’s physiognomy from their transient emotional states as revealed by their facial expressions became an obsession for the physiologist Guillaume-Benjamin Duchenne de Boulogne.

One notable person who followed his work closely was Charles Darwin, who at the time (1872) was working on his book, The Expression of Emotions in Man and Animals. Darwin’s investigations into facial expressions and how they gave insight into mental states relied on photographic documentation as well as personal observation.

The combined research of Duchenne and Darwin were a key component in the foundation of the fledgling field of psychology in the late 19th century.

Photographer Marcel Sternberger found his way into psychological portraiture purely by serendipitous events: in 1925 the first handheld camera, the 35mm Leica, was released to the public, thereby freeing the photographer to be more spontaneous in capturing fleeting action. Then he managed to leave Germany the day before the Nazis confiscated the passports of all Jews in the country in 1933; and last, his wife, Ilse, who was a passionate student of filmmaking when they met, gave him a Leica as a wedding gift.

Sternberger went on to create some of the most revealing portraits of the 1940s and 50s including the Belgian Royal family and many luminaries of the 20th century such as George Bernard Shaw, H.G. Wells, Diego Rivera, Frida Kahlo, Albert Einstein, Sigmund Freud, Jawaharlal Nehru, and the portrait of Franklin Delano Roosevelt that also appears on the United States dime.

In today’s society someone’s personal moments are easily photographed because everyone has a camera or smartphone. And yet given all our technology it is still not so easy to capture an insightful portrait.

In the 1940s Sternberger’s work was revolutionary not only because of his personal approach in using psychology to lower a sitter’s defenses, but also the fact that he eschewed the formalism of photographing subjects with large format (8x10 view) cameras in a studio, instead using the small 35mm handheld Leica and photographing the subjects in their own space.

While there are tons of books that will instruct you as to how to pose and light someone superficially to “look good” in a portrait, it is difficult to find a book that will give you insight to reveal the true person within. Some photographers stumble upon it if they are sensitive to the sitter’s mood.

Photographers today can still learn much from Sternberger’s approach and philosophy of minimal equipment “. . . there is true art in limitation,” and using psychology as a foundation for their interaction with the client. His extensive anecdotal notes of photo sessions with President Roosevelt, Nehru, Einstein, Freud, and many others, as well as their correspondence that followed (published as facsimiles) are illuminating.

The Psychological Portrait is a remarkable book in its revelatory power to show us a side of personalities such as Einstein, Freud, Frida Kahlo and Diego Rivera that are rarely seen. It also demonstrates that Sternberger was on the cutting edge of photography by using the insights of psychology to achieve his perceptive portrayals. Had Sternberger not died in a car accident in 1956 at 57 years of age it is easy to imagine how astoundingly influential his work would have been to a new generation of photographers.

The Psychological Portrait: Marcel Sternberger’s Revelations in Photography by Jacob Loewentheil is beautifully printed on medium-weight semi-gloss paper. The excellent tonal range of the images is a testament to Sternberger’s negatives and the high standards of publisher Skira Rizzoli.