The Many Lives of Michael Bloomberg 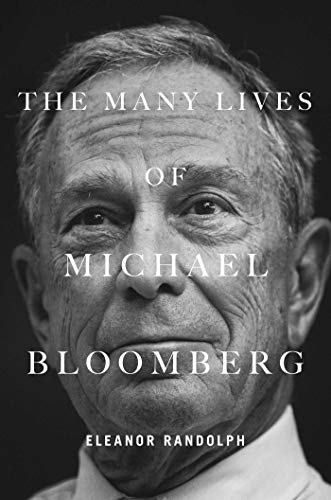 “For a riveting account of contemporary action the visionary Michael Bloomberg is taking to battle environmental degradation and a host of other societal ills, Eleanor Randolph’s unauthorized biography is a must read.”

One expects an unauthorized biography to be a salacious tome, but The Many Lives of Michael Bloomberg manages to be a factual summation of this billionaire former Mayor of New York’s life without being dull. Randolph’s skilled writing makes the facts and figures of being Bloomberg interesting and actually a page-turner.

Bloomberg, who is by anyone’s estimation is a creative and brilliant businessman, is also an engineer and a data geek, which makes him both an awkward public speaker and beloved by policy makers. He actually is the executive who reads your reports on public health, water and air quality, and traffic.

Further, the Mayor of New York doesn’t just read the reports and analyze the data, he makes policy changes and invests his own money to make improvements as Randolph illustrates throughout this biography. For this trait he has drawn more than a little wrath, but nothing seems to daunt Mr. Bloomberg. Rather than retiring to one of his villas he started a new foundation in his seventies. Bloomberg is one of the billionaires who has signed the Giving Pledge to donate most of his fortune, like Warren Buffett and Bill and Melinda Gates.

Randolph is at her best when she describes Bloomberg the man as opposed to the icon, especially with the personal anecdotes about helping city employees. Bloomberg goes out of his way to help family members of his staff and campaign workers obtain access to medical specialists otherwise out of reach. Here he is revealed as a generous spirit who gives his time and his money equally, not just someone who writes checks.

Throughout the book there are glimpses of Bloomberg’s sense of humor (his favorite film is Mel Brooks’ Blazing Saddles) and he loves a good John le Carré novel. That is another distinguishing characteristic from his nemesis, Trump: He actually reads books.

An aspect of Bloomberg the man that differs from so many of the billionaire men his age is that he surrounds himself with strong women, and his partner isn’t 30 years his junior. Bloomberg isn’t interested in mere eye candy but women who can be vital partners.

Bloomberg called cities “the laboratories for democracy, and if we can help them along, we can sleep well at night.” Unlike a lot of other elected officials, he doesn’t waffle once a decision is made even when the critics assail the action.

One of the greatest moments in The Many Lives of Michael Bloomberg is Randolph revealing that when President Trump announced the Unites States was dropping out of the 195-country Paris Accord, Bloomberg was already in Europe, scheduling a diplomatic meeting to combat global warming on the world stage. While the US President is announcing his disinterest in addressing manmade global warming Randolph takes us across the pond to Paris. The very next day Bloomberg was meeting with French President Emmanuel Macron and Parisian Mayor Anne Hidalgo at the Elysee Palace making a commitment to cut greenhouse gases at the city level.

Within five months Bloomberg, along with California Governor Jerry Brown, had commitments from 100 cities, 20 states, and 1,300 businesses to join the fight against global warming.

Bloomberg responded to Trump’s revolting comments about marching neo Nazis being good people after the Charlottesville debacle with this wry observation, “I just recently visited Auschwitz for the first time. It’s hard to imagine how such evil could still lurk here in America. But it does, and we must never flinch from rejecting it. Religious tolerance and racial equality are the bedrock of American greatness.”

Bloomberg did not stop there, but increased his criticism of the Trump Administration’s inhumane treatment of immigrants at the southern border, lax positions on sensible gun control, broken trade agreements, and tax breaks for the rich. How refreshing to have a billionaire speak out about the inequity of tax breaks of the top 1%. As Mayor Bloomberg would say, “It’s just not good business.”

For a riveting account of contemporary action the visionary Michael Bloomberg is taking to battle environmental degradation and a host of other societal ills, Eleanor Randolph’s unauthorized biography is a must read.