Mandrake the Magician: Fred Fredericks Sundays Volume 1: The Meeting of Mandrake and Lothar 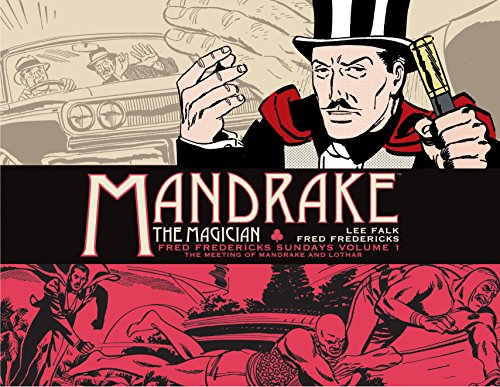 Legendary comics writer Lee Falk will probably always be best known for The Phantom, the costumed vigilante that he created back in 1936. There is good reason for this, for The Phantom is still being printed in the Sunday funnies as we speak. Millions of Americans still gobble up the adventures of the purple manhunter of Bangalla. Mandrake the Magician, Falk’s earlier creation that debuted in 1934, is certainly less known. Fortunately, Titan Comics has brought the magician-cum-spy back to life thanks to this large and handsome volume.

This hardbound book includes 13 stories taken from between the years of 1965 and 1969. Each story is reprinted in its original, newspaper comics style. By this point in the history of Mandrake the Magician, artist Fred Fredericks replaced longtime penman Phil Davis. Fredericks helped to update the Depression-era character, and this volume certainly displays how Falk and Fredericks used Mandrake to take on issues like nuclear war, world peace, urban crime, and municipal corruption.

In between these headier moments, Mandrake, his friend Lothar (a former African prince with otherworldly strength), his sweetheart Narda, and the secretive crime fighters of the Inter-Intel organization (a global espionage outfit) do battle against masked supervillains, spacemen, and gangsters.

Traditional American pulp mixes with science fiction elements in these stories. In “the Cobra Returns,” Inter-Intel hires Mandrake to take on his arch-nemesis The Cobra, a hooded and masked wizard who is responsible for a string of bizarre killings. Another story, “The All or Nothing Hunt,” has Mandrake and his friends, including his judo expert chef Hojo, racing against the clock in order to stop two intergalactic gamblers, Alpha and Beta, from blowing up Earth.

This collection is Sunday morning escapism at its very best. Falk’s writing is straightforward, unadorned, and replete with the type of derring-do one would expect from either Flash Gordon or The Phantom.

There is also plenty of James Bond in these stories, as Mandrake’s supernatural powers are often put to the test against eccentric criminals who use isolated islands in the Caribbean to concoct outrageous schemes. Baron Chance, a playboy blackmailer, seems similar to Bond villain Emilio Largo, while Doctor Zed of “The Blackout Caper” is an amalgam of Dr. No and Blofeld.