The Man Who Quit Money 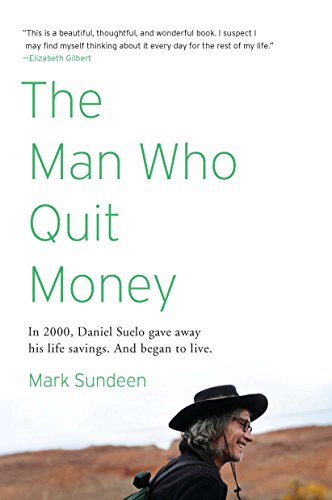 If you're searching for a modern-day successor to Thoreau, Daniel Suelo could be your postmodern Transcendentalist. Suelo has spent the last 12 years living in a cave near Moab, Utah, foraging for food, working occasionally (but not for wages), reflecting deeply on life's Big Questions, and somehow managing to keep himself off the hamster wheel of getting and spending.

Suelo is the rare person who has actually been able to opt out of life's pecuniary tangle, while still living an existence that appears full and unclouded by the despair we tend to associate with homelessness.

Suelo began life as Daniel Shellabarger, the fifth child of a pair of thoughtful evangelical Christians, who was raised to take the Bible literally and yet was also permitted to question.

A thread within the book traces his theological development from a child forced to believe to a deeply inquisitive college student to someone who reads source texts from world religions as well as Thoreau, Gandhi, and Tolstoy and cobbles together a personal theology that reflects his own beliefs.

In later years, Suelo even goes back and reviews texts that inspired his parents, such as Jesus' Sermon on the Mount, and comes to understand Christ’s more revolutionary ideas.

He also develops his own theological notions, such as the concept of "divine Chance," which he develops as a penniless visitor to Alaska, who must test the phrase "God will provide." He realizes that to experience true faith, he must accept that there's nothing in the material world to fall back on.

Starting at age 26, Suelo spends several years as a Peace Corps volunteer in Ecuador. During that time, some of his religious convictions are tested, as when he visits the mansion of a fellow volunteer who has recruited Ecuadorian natives into helping him run his own cattle business, to the point at which they are "civilized" into being the richest Indians in the jungle.

He notes, "There was no poverty in the jungle until they introduced money, and all the sudden there's poverty. And all the diseases that come with it. And you look at people and they're not happy. They have all these goods, and they're unhappy."

While battling his own depression and coming to terms with his sexuality, Suelo retains his sense of philosophical inquiry as he spends more than a decade trying to make the switch to a life without money.

Mark Sundeen well conveys how conscious and reflective Suelo is as he takes great care to unravel the roots of so much suffering derived of our participation in a monetary system.

Suelo emerges as deeply Christian, in the sense of living out what Christ actually taught: becoming spiritually enlightened through giving to the poor and living humbly. As Suelo asserts, "All this work, work, work and obligation we think is so righteous is really evil, destructive. The more I read the Sermon on the Mount, the more I see it is instructions for releasing ourselves from the Money System–the System of Debt & Obligation."

Because he lives in a cave and thinks deeply, one might conclude that Suelo is a hermit. But this is actually not the case, as it wasn't for Thoreau.

Despite his comfort with alone time, Suelo is "a social butterfly" and enjoys the companionship of his many friends and family members. In fact, his vow to live without money often draws to him people who are curious about his life and principles. He readily acknowledges that, in a completely interconnected universe, no one is entirely self-sufficient—and his renunciation of money is not about wanting to sever those ties.

In addition to the excellent writing, what makes this volume so compelling is the number of questions it raises about the issues we all grapple with: money and greed, family, relationship, compensations of every stripe, trading quality of life for work, the definition of home, etc.

Mr. Sundeen hews a very clear path into Suelo's mind, and it's fascinating to watch him take clear-eyed looks at his own life and motivations. At one point, Suelo discusses why he's not in a relationship, and the author asks, "How much of your life is just a reaction to not falling in love. Do you think you were driven into solitude by a broken heart?"

Suelo's measured response reveals just how deeply he has considered these questions—and his own reflection compels the reader's soul-searching as well.

Heidi Utz is a writer and editor. Her work has appeared in such numerous publications as Outside magazine, NPR.org, Santa Fe Reporter, and Albuquerque Tribune. She was a contributing author to the book Montezuma: The Castle in the West.