The Man Who Lived Underground 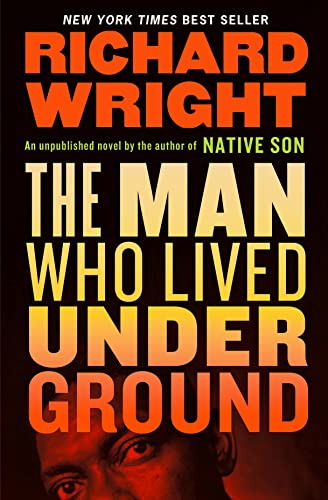 “In its winding subterranean travelogue, and profoundly evocative, allegorical blues surrealism, The Man Who Lived Underground reads less like a follow-up to Wright’s naturalist Native Son than an excavated ancestor to Colson Whitehead’s The Underground Railroad.”

In Shadow Archives, literary historian Jean-Christophe Cloutier describes “shadow books” as complete, unpublished works discovered in deceased authors’ archives that reveal unseen dimensions of the writers’ work. The determination to preserve these books runs particularly deep among the great Black authors of the 20th century, in large measure because so much of their finest writing was ignored, bowdlerized, or otherwise ill-served by a white-dominated publishing industry.

Richard Wright became arguably the first Black novelist to achieve mass-market mainstream success with the bestselling Native Son in 1940. But even Native Son came to light “under difficult circumstances,” Cloutier writers, and Wright’s shadow books outnumber those he lived to see published, even though that may seem strange for a writer whose work proved so profitable to his publishers in his own time.

The Man Who Lived Underground, the latest and arguably the greatest of Richard Wright’s striking shadow books, starts off like a story ripped from today’s headlines, although it was written, submitted for publication, and summarily rejected in 1941, just as Native Son was enjoying its unprecedented success. Within The Man Who Lived Underground’s wrenching first few pages, white policemen accost and abduct a Black man walking home from work, falsely accuse him of the brutal double murder of a white couple, and beat him mercilessly until he signs a confession that their abuse has left him too bloodied and blinded to read, and too disoriented to understand.

That opening scene is as searing, vivid, infuriating as anything in Native Son. But what follows is nobody’s protest novel.

The Man Who Lived Underground soon abandons Native Son-style naturalism and takes a swift and unexpected allegorical turn, as the wrongly accused Fred Daniels spots a dislodged manhole cover and escapes into the sewers. Daniels digs his way into basements, proceeding to observe, unseen, a series of vignettes that lay bare society’s condoned injustices and indignities and his own race’s rote capitulations. As Daniels loses track of the time he has spent underground, and his sense of location vis a vis the “aboveground” world recedes, his invisibility and curiously achieved self-sufficiency in the sewers enable him to stand outside the law and apart from the aboveground world’s contrived conventions, restraints, and artificial notions of value, and see it with new eyes.

His life “snapped in two” between the aboveground and underground worlds, and by the certainty of his execution if he resurfaces, Daniels tunnels into to unexplored vistas. He observes daily rituals at a security company, a jewelry store, a movie house, and a Black church congregation worshipping in a basement, perceiving their denizens and the circumscription of their lives and consciousness as never before.

“When he had sung and prayed with his brothers and sisters in church,” Wright writes of Daniels watching the churchgoers, “he had always felt what they felt; but here in the underground, distantly sundered from them, he saw a defenseless nakedness in their lives that made him disown them . . . [T]he groveling spectacle of those black people whose hearts were hungry for tenderness, whose lives were full of fear and loneliness, whose hands were reaching outward into a cold, vast darkness for something that was not there, something that could never be there, churned within him.”

Some readers won’t find The Man Who Lived Underground entirely unfamiliar. The first posthumously published collection of Wright’s work, Eight Men (1961), included a short story of the same title, which Wright also sold to Accent, a literary magazine, in 1941 after Harper & Brothers rejected the full manuscript. The story published in Accent and Eight Men eliminates Daniels’ arrest (Accent’s editor termed those scenes “unbearable”), robbing the book of critical context, and a great deal of its narrative force.

Restored to its intended form as discovered by Wright’s daughter among the author’s papers in Yale’s Beinecke Rare Book & Manuscript Library in 2010, the 2021 edition of The Man Who Lived Underground reveals a compact and hypnotically gripping novel that many readers will hungrily consume in a single setting.

The new publication also includes the denser and more contemplative “Memories of My Grandmother,” an informative essay along the lines of Wright’s brilliant “How Bigger Was Born.” The essay explains much about the various sources of inspiration that coalesced in The Man Who Lived Underground: Wright’s formative but contentious relationship with his Seventh-Day Adventist grandmother (also explored at some length in his memoir Black Boy), an article about a tunnelling white sewer-dweller in an L.A. newspaper, surrealist art, Gertrude Stein’s Three Lives, Wright’s pre-occupation with the lurid “Invisible Man” B-movies of the 1930s, and the lyrics of blues songs. Wright cites, in particular, blues lyrics’ tendency to portray disparate, resonant scenes in successive verses without attempting to arrange or connect their contents in a conventional or cohesive narrative structure.

In its winding subterranean travelogue, and profoundly evocative, allegorical blues surrealism, The Man Who Lived Underground reads less like a follow-up to Wright’s Native Son than an excavated ancestor to Colson Whitehead’s The Underground Railroad.

One reason the Richard Wright of The Man Who Lived Underground may seem alien to the Wright readers from Native Son and Black Boy is that the versions of those books that appeared upon publication were so dramatically different from the versions the writer intended to present to the world. Crucial scenes from Native Son were tagged as too racially, sexually, or politically charged and inflammatory for contemporary readers and purged from the manuscript before publication. Black Boy (1945), under its original title American Hunger, included six chapters not published until 1977. The excised section focuses on Wright’s experiences with racism, poverty, and starvation in Chicago, and his bullying at the hands of narrow-minded and dogmatic Black Communists during his time with a South Side CPUSA unit in the 1930s.

By concluding with Wright’s escape from the South and eliminating the last third of the book (and with it, his struggles north of the Mason-Dixon line), the 1945 edition of Black Boy followed the accepted contours of 19th century slave narratives, and also adhered to the rigid strictures of Cold War Liberalism as it would emerge in subsequent years, which would tolerate no association with Communists (unless it unequivocally renounced past dalliances, which American Hunger did not), and would acknowledge American racism only in the backward and alien Jim Crow South.

Interestingly, Harper & Brothers, which rejected The Man Who Lived Underground outright in 1941, did not, of its own volition, apply the revisions that disfigured Native Son and American Hunger/Black Boy. The guilty party in those cases was the Book-of-the-Month Club, whose imprimatur Harper considered essential to finding an audience for the books. The Club may well have understood that a venture as bold as unleashing Native Son in 1940 would have failed utterly if the published book had exposed white readers to recently restored scenes acknowledging Bigger Thomas’ ambivalent sexual attraction to Mary Dalton and detailing their brief physical encounter.

The unexpurgated text, if it had somehow survived intact in a book that sold 215,000 copies in its first three weeks, might still have inspired James Baldwin’s scorching dismissal of Native Son as a political broadside disguised as a novel, in an essay in which he assailed his former mentor for producing a contemporary heir to what Ibram X. Kendi has called the “racist abolitionism” of Uncle Tom’s Cabin.

“The ‘protest’ novel, so far from being disturbing, is an accepted and comforting aspect of the American scene, ramifying that framework we believe to be so necessary,” Baldwin wrote in “Everybody’s Protest Novel” in Notes of a Native Son (1949). “Whatever unsettling questions are raised are evanescent, titillating; remote, for this has nothing to do with us, it is safely ensconced in the social arena, where, indeed, it has nothing to do with anyone, so that finally we receive a very definite thrill of virtue from the fact that we are reading such a book at all. This report from the pit reassures us of its reality and its darkness and of our own salvation; and ‘As long as such books are being published,’ an American liberal once said to me, ‘everything will be all right.’”

Wright himself acknowledged a similar problem upon experiencing white readers’ reactions to his acclaimed 1938 quartet of novellas, Uncle Tom’s Children: “I found that I had written a book which even bankers’ daughters could read and weep over and feel good about.”

Wright, unlike Baldwin, saw Native Son as a book “too hard” to engender weeping or virtue-signaling—even if he did write it primarily for white readers, with its stunted Black antihero consumed by fear and rage, and the climactic courtroom eloquence of its proto-Atticus Finch-in-National Lawyers Guild drag, the heroically empathetic Boris A. Max.

In “Everybody’s Protest Novel,” Baldwin also writes of the “cage” of co-dependent collective consciousness, in which “the oppressed and the oppressor are bound together within the same society; they accept the same criteria, they share the same beliefs, they both alike depend on the same reality.”

The concluding scene of The Man Who Lived Underground depicts Fred Daniels rising from the sewers of an unnamed city, armed with almost precisely this transcendent understanding, ready to shout it from the rooftops and awaken anyone within earshot, beginning with the killer cops who collared, framed, and tortured him.

One can only imagine what Baldwin might have made of Fred Daniels.