The Man I Knew: The Amazing Story of George H. W. Bush's Post-Presidency 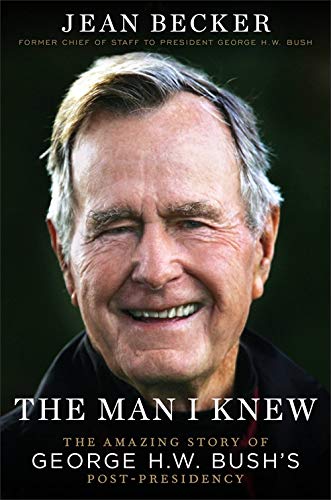 George Herbert Walker Bush came into the US presidency as one of the most qualified candidates to assume office. But if presidential success is determined by winning reelection, Bush was unsuccessful because he failed to convince the American public to give him another four years in office. But if this narrow-minded definition of what constitutes a success is true, George Bush’s post-presidential legacy can only be labeled as a triumph.

As Bush’s post-presidency chief of staff, Jean Becker had a ringside seat to the never-dull story of the former president’s life after his years in the White House. After losing reelection in 1992 to Bill Clinton, Bush’s life “was filled with determination, courage, generosity, love, hope, humor fun, and always big ideas.”

He developed the odd habit of jumping out of airplanes; and learned how to adjust to life in a wheelchair, after having lived most of his life as a high-energy athlete. He enthusiastically saw two sons become governors of their states, one of whom would also become President of the United States. But one odd and highly unlikely development stands out among his post-presidency achievements.

Through the ages, the President's Club has seen its share of rivalries, alliances, even some true friendships, but on December 26, 2004, Bush and Clinton’s relationship changed forever when a catastrophic tsunami struck Indonesia. In Washington, President George W. Bush and his advisors searched for an appropriate way to coordinate and direct the outpouring of aid from private sources. It was the younger Bush who came up with the idea of asking his father and Clinton to work together. Both were proven fund-raisers and had deep-rooted contacts. Bush and Clinton have been described many times as the odd couple of American politics, but in the years following this tragedy the two former political foes developed a close bond and connection that surprised both men and many of their longtime aides.

The Man I Knew: The Amazing Story of George H. W. Bush’s Post-Presidency by Jean Becker is a wonderfully poignant and intimate behind-the-scenes portrayal of George Bush’s post-presidential life and accomplishments. Becker served as chief of staff during this period and had unique and unparalleled access to the personal and public life of the former president. Based on her personal recollections, Becker details the ups and downs of running the office of a former president from the perspective of someone who knew him best.

The Man I Knew is a delightfully touching narrative and worthwhile read, but Becker admits that the narrative is not objective. She confesses to being one of Bush’s greatest fans. So if you are expecting secrets and gossip about Bush’s personal life this is not the book for you.

As Becker writes, “He lived what he preached: Any definition of a successful life must include serving others.” She goes on to describe how Bush “rebuilt his life” and “found a way to continue making a difference.” This is the story of Bush’s modest journey from president to a man of the people and how, after his emotionally draining and heartbreaking defeat to Bill Clinton in the 1992 presidential election, he found a way to make a difference. By the time of his death in November 2018, he was one of the most admired, respected, and beloved former statesmen.