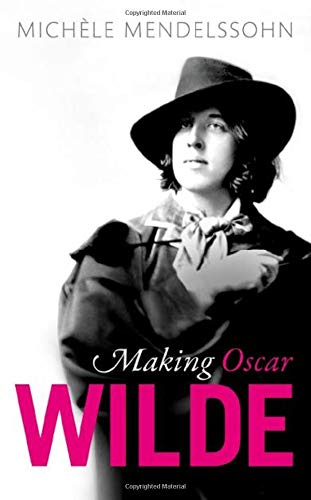 Anyone interested in Wilde’s Irish childhood, his years as the toast of London, his palling with Lillie Langtry or tussling with James Whistler, his love for Bosie or his battle with Queensbury, his trials and imprisonment and exile, his quarrel with the wallpaper and his pathetic death, should continue to look to Richard Ellmann’s magisterial if flawed 1987 Oscar Wilde for details. None of these get any more than a passing mention in Making Oscar Wilde.

Nor should they. For Making Oscar Wilde focuses not upon the year-by-year existence of the person Oscar Wilde, but rather upon the persona: the unique, larger-than-life image of Wilde, as compelling today as it was in the 1890s. Specifically, Mendelssohn—meticulously, convincingly, and with great gusto—maps the creation of that image, largely forged in fire during one very tumultuous year of Wilde’s life: 1892, the year he toured America.

In 1877 Wilde, then a 23-year-old Oxford undergraduate, stated his one burning ambition: “success: fame or even notoriety.” By 1881, he had not quite found it, though that was not for want of trying.

He then lived in London and operated on the periphery of the Aesthetic Movement: hobnobbing with the right people, publishing poetry that the critics dismissed as derivative, and gaining some traction in the public consciousness, thanks to George Du Maurier’s wildly popular caricatures of him in Punch as well as to several characterizations of him on stage, most notably the Whistler/Wilde hybrid Bunthorne in Gilbert and Sullivan’s Patience.

Patience gave Wilde his ticket to America. Its impresario, Richard D’Oyly Carte, proposed he make a lecture tour stretching the length and breadth of the country in order to drum up interest in D’Oyly Carte’s two American touring productions of Patience. Wilde jumped at the chance.

It proved to be a harrowing experience. The American media, catering to obsessive public interest with the English Aesthetic Movement, put Wilde under a microscope: in articles, illustrations, and even music it attempted to define and explain him—most often with speculation, innuendo, and vicious caricature.

They went at him with racist fervor, savaging what they saw as the low-born Irishman beneath the English veneer. Mingling their Celtophobia with Negrophobia, they spawned Christy-minstrel caricatures of him and encouraged blackfaced imitators to launch their own speaking tours.

Wilde’s own stage-manager, clearly holding all publicity to be good publicity, apparently abetted this racism to sell seats. And before Wilde had been two months in the country the general attack on his ethnicity expanded to include an attack upon his seemingly ambiguous sexuality.

Wilde in response was forced to define himself. And with the help of the great amplifying powers of both the American and the British press, he largely succeeded.

Upon arriving in New York, he arranged for a memorable and inspired photoshoot, which led to the most iconic images of Wilde we have today. He made himself the center of society wherever he went. He staged publicity stunts to enlarge his crowds. He gave dozens of carefully staged interviews, invariably while stretched out languorously upon a sofa, freely making up facts and inflating his importance as the leader of the Aesthetes.

Mendelssohn’s vivid account of Wilde’s creation of Wilde amounts to a primer on methods of publicity and promotion, methods to be sure firmly rooted in the Age of Barnum (and indeed, P. T. Barnum actually attended one of Wilde’s lectures in order to gauge his potential), but at the same time prefiguring star-maker machinery in our own Age of the Kardashians.

By the time that Wilde returned to London early in 1883, the transformation was largely complete: He had perfected his persona of the “ironic dandy” and had found the fame he craved.

As an account of the genesis of Wilde’s persona, then, the fact that Mendelssohn devotes two-thirds of her book to one crucial year in Wilde’s life makes perfect sense. But the fact that she largely ignores half that year does not.

We learn about the beginning of January through the fourth of July in glorious detail but learn next to nothing about Wilde’s subsequent six months in America.

What happened during those six months? Plenty, it seems: Wilde extended his lecturing with return visits throughout the northeast; he had a disastrous meeting with Henry James to balance a delightful (and in this book fully described) meeting with Walt Whitman; he cannily marketed the American rights to one of his early plays; he spent two months in the company of Lillie at the start of her own triumphant US tour. Why then the truncated account of Oscar’s year in America? Was the Oscar persona fully-baked by July? And if that is the case—how do we know that? The reader deserves some explanation of this curious selectivity.

It’s also worth noting that the Oscar persona we now know and love is not exactly the same as the Oscar persona of the 1880s and early 1890s. As Mendelssohn writes, “Today, Wilde’s sainthood is secure. He has become gay history’s Christ figure.”

But that image of Wilde certainly did not exist in 1882. Our own iconographic sense of Oscar Wilde is nuanced by the knowledge of his passion: his suffering, exile, and death. A fuller exploration of what went into the creation of our icon, as opposed to the Victorians’, would be a valuable addition—or would make for a valuable sequel—to Making Oscar Wilde.

Quibbles, these. Making Oscar Wilde succeeds commendably at what it sets out to do: offering a vivid, intelligent look at Victorian celebrity culture through the rise to fame of one of its brightest stars. And that’s something you won’t find elsewhere—not even in Ellmann.