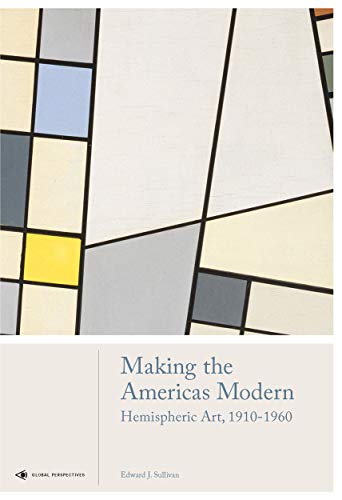 Edward Sullivan’s Making the Americans Modern is a highly academic study of art work during this particular 50-year period in history. Between 1910 and 1960 numerous social, political, natural, and artistic shifts occurred in the North American, Central American, and South American countries that constitute the American Hemisphere, which, as the title indicates, is the setting of this assessment.

Using historically significant art exhibitions as timeline bookends to help contain his thoughts, Sullivan launches his “story-telling” into eight vastly diverse segments of conceptual commentary. His primary concern throughout is how to explain what was happening in the art world of the Americas in relation to the dominant European artistic forces of the time. In the midst of a chronology of pushy and powerful “isms,” how could a region create a current, relevant, and modernized artistic presence all its own?

Each chapter explores a unique topic of interest. Themes such as symbolism in imagery, urban and rural landscapes, the impact of race, cross-border exchanges, social issues of labor and mental health, and individual artistic visions are examined. Within each chapter, certain artists and art works are highlighted as examples of expressions of the various ideas under discussion.

In one of the most charged and potentially controversial essays, Chapter 3 tackles the paradox of race in the Americas. In it, the artistic representation of blackness as a subject matter, as an aspect of the artist himself, or as a starting point of reference for the multitude of opinions regarding social and cultural positions are each considered.

For this chapter the selected artists include the revered Brazilian painter Tarsal do Amaral, Lithuanian-German-Brazilian Lasar Segall, Dominican artist Celeste Woss y Gil, and Cuban Victor Manuel Garcia—all of which add fuel to the controversy fire simply because they are non-black artists engaged in decidedly black artistic representations. Which raises the question, can a non-black voice determine the cultural and artistic identity of an entire hemisphere whose black population was mostly marginalized and certainly not trained in the fine arts academies of Paris?

This is not the only sweeping, broadly generalized anomaly raised in this book. Actually, each chapter presents its own. Struggling to distill an origin of artistic identity, Making the Americas Modern flails widely about. It dances chapter by chapter between the nature versus nurture debate: What artistic cores would exist if no outside influences permeated the isolated bubbles? Should the hemisphere claim as its own only purely indigenous creations? (Should it, using Sullivan’s language, be an autochthonous synecdoche?) Or can its voice include personalities from migrants, or colonists, or mestizos, or even artists who left the hemisphere? Apparently, this matters very much in defining artistic modernization.

Content wise, there is no lack of ideas and examples. Sullivan is, after all, an art historian and a professor. Which is both his strength and his weakness. There is no doubt of his qualifications to write a volume such as this. The weakness is that his delivery is overwhelmingly academic in style which takes almost the length of the book to accommodate.

Compound sentences and complicated vocabularies dominate and are hard to follow. This writing/lecturing approach serves more to distract and deter the reader, rather than engage and educate, particularly when thoughts could easily have been communicated without sacrificing intelligence or meaning. A good deal of editing would have been a terrific contribution.

For instance, in commenting on the impact of abstract art in the American hemisphere, Sullivan states that, “A more nuanced review of gestural abstraction that I wish to argue for here (in a highly abbreviated way) is not merely a revisionist statement—it is, instead, meant to resist the by now less-than-useful traditional categories and the hegemony of certain paradigmatic figures as the principle (or the only) paragons of creativity.”

Does he mean to say that abstract art has many approaches and varieties and needn't be controlled by one point of view? Or that abstract art offered an opportunity for the Americas to find their own visual emotional language instead of relying on European findings? The readers will find themselves rephrasing much of the book in order to facilitate comprehension.

Sullivan has contributed a well-researched project that offers multiple ways to assimilate art history into the complexity of the human civilizations of recent history, however his target audience will remain isolated in academia.