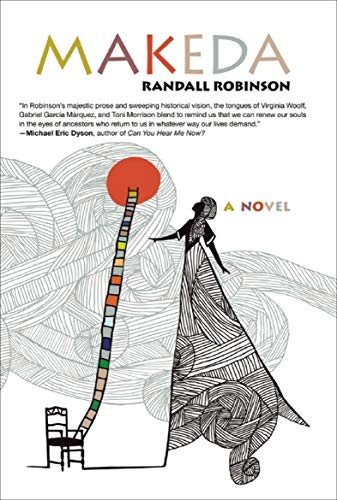 “Makeda is beyond ambitious and imaginative and, at times challenging, but it is also well written and powerful, with an ending that is equal parts tragic and romantic in nature. . . . a breathtaking revelation, weighted with romance and lovely passionate prose.”

Makeda is an interesting dichotomy and as such slightly hard to categorize. It is a sweeping saga starting at the point of the civil rights movement and tracing the roots of a common history through time and space. At the same time, Makeda is a highly personal inner journey of one man, Gray March.

Makeda is beyond ambitious and imaginative and, at times challenging, but it is also well written and powerful, with an ending that is equal parts tragic and romantic in nature.

Gray March is a conflicted young man when he comes to his grandmother’s parlor to enjoy her company, seeking refuge from his own life. He is alienated from his father and mother and, as we quickly learn, has brother has died under mysterious circumstances.

The grandmother is the character of the title Makeda. She is a blind woman who claims to have visions and recollects past lives and stories that resonate with Gray, motivating him to take her seriously and investigate further her dreams.

Makeda has been blind since birth, but she dreams in color. She recollects several past lives through dream like states and, one of these dreams leads her grandson on a research expedition through Africa. Jeanne Burgess is the scholar and love interest that holds Gray’s past up as the stumbling block it is, and forces him to reveal and deal with his ghosts so that he can move forward.

Makeda is a very matriarchal tale and the female characters here are admirable and strong, which is a rather unique thing to find in contemporary fiction. In fact, they are the heart and soul of the novel, despite the fact that the main character, Gray is a man. He is fashioned by the female influences in his life.

Randall Robinson is an intellectual and a literary writer of note. He has numerous publications to his credit. He is the author of An Unbroken Agony and bestsellers, The Debt, The Reckoning, Quitting America, and Defending the Spirit. This novel is well researched and intricate. It delivers a lot of historical fact. If I were to have any criticism of this book it would be that it is at times too densely packed and might have been more aggressively pruned.

Mr. Robinson’s prose is quite lovely in passages such as: “The month of March seems invariably to promise more than it delivers, teasing spring, frustrating hope’s impatience.” And yet there are moments that it is almost bogged down by the plot and excessive wordiness. While the main character Gray is accomplished and a scholar and the intellectual style of writing is not completely out of character, it is a barrier for readers. It is an intellectual affect: using four large words when one accurate one might do and make a work more accessible.

The reincarnation theme takes us through history and dabbles in magic realism. As such, Mr. Robinson’s latest has earned some comparisons to the writings of Gabriel Garcia Marquez and Toni Morrison, but the latter author has more in common with Robinson stylistically and thematically.

While suspense is maintained through much of Makeda, the middle section lacked momentum. But the end of the story is more than worth the effort. The final few pages of Makeda are a breathtaking revelation, weighted with romance and lovely passionate prose.