The Main Street Vegan Academy Cookbook: Over 100 Plant-Sourced Recipes Plus Practical Tips for the Healthiest, Most Compassionate You 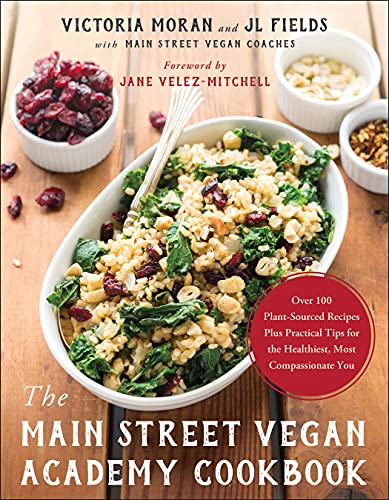 “Victoria Moran reminds us that being vegan is not complicated. Have fun . . .”

There was a time, not so long ago, when veganism was associated with the granola and kale eating segment of society and meatless food options were difficult to find. Today, all that has changed. Soy and almond milk are permanent alternatives at Starbucks. Kale salads and quinoa are commonplace. Veganism has become mainstream with hundreds of new restaurants popping up across the country. Even traditional restaurants include vegan options on their menus.

The Vegan Society was established in 1944, but plant-based eating has been around for longer than that. Greek philosopher, Pythagoras, promoted a diet that could be described as vegetarian. His writings urged benevolence among all sentient beings. Buddha also encouraged vegetarian diets among his followers.  Hippocrates’ famous quote, “Let food be thy medicine, and medicine be thy food,” is the mantra for many suffering from illness. Buddhism and Hinduism follow special ways of eating that include some forms of vegetarianism.

Philosophers like Jeremy Bentham wrote that animal suffering was as serious as human suffering—a precept still advocated by People for the Ethical Treatment of Animals (PETA).

The Kushi Institute, founded in 1978, is a macrobiotic community well known in alternative healing circles for its ability to cure some types of cancer. “Macrobiotics recognizes the profound effects food, environment, activities, and attitude all have on our body-mind-emotions.”

For the past 35 years, Dr. Dean Ornish has taught that coronary heart disease is reversible through diet and lifestyle changes.

The Main Street Vegan Academy Cookbook looks at veganism through both a philosophical and practical lens. This book successfully merges the two platforms. The focus is on living a life devoted to the ethical, spiritual, and health of animals as well as eating a whole foods plant-based diet. Being vegan is a lifestyle.

What this cookbook offers is the merging of both vegan concepts with whole plant-based recipes. However, the plant-based discussion looks at food and culinary skills rather than politics and ethics. The authors pen a book that is unique in its format. The reader is, in fact, a participant at the Academy, and is coached throughout the course of the book.

The cookbook’s author, Victoria Moran, is a prolific writer. For this book she has collaborated with JL Fields and the MSVA (Main Street Vegan Academy) coaches who have graduated from the Academy.

This is a unique book. Not only is it a cookbook, but it is also a book about vegan living today.  This singular book is an essential course on veganism. Vegans might eat junk food and not think about kale and broccoli, but the recipes represented in this book are whole plant-based foods. Health is of importance here. J. L. Fields and Academy graduates offer up some of the most delicious vegan recipes, proving that we do not need meat, eggs, or dairy to be fully satisfied with our daily menus.

Chapters in the Main Street Vegan Academy Cookbook include a “Coaching Corner” with valuable tips and suggestions. These coaches stay with the reader throughout their journey and offer educational tidbits with a wealth of knowledge.

Experiment with the recipes that tempt you. Plain oatmeal is transformed into Victoria’s Victorious Oatmeal Parfait. Add some walnuts and get a healthy dose of omega-3 fatty acids. Spanish omelets are made without eggs and are delectable. The Banana Bread with Cherries and Chocolate Chips will be a big success among adults as well as children.

One favorite chapter is “The Social Vegan,” otherwise known as “Culinary Activism.” Offer up vegan treats at school events and serve only vegan options when entertaining.  Gently let your guests, friends and acquaintances know that they are enjoying the deliciousness of vegan cooking and baking.

Vegan and whole food cooking lends itself beautifully to entertaining. Plain vegetables are elevated to another plane with the Heaven Can Wait Super Sauce. Pesto is transformed with peas and pistachios, which contain all nine essential amino acids. Even hollandaise and tzatziki can be revamped into improved versions of the originals.

Although some of the recipes contain long lists of ingredients, there are sufficient options in the book to choose something that is less demanding—but certainly worth trying—like Chips ’n’ Salsa Bean Burgers.

Welcome the parts of the book that resonate with you. Experiment with recipes, as they are easily accessible. Become more compassionate toward animals. Even try eliminating honey from your tea. Take small steps toward becoming a vegan, unless you are already there. Victoria Moran reminds us that being vegan is not complicated. Have fun with this way of eating and living.