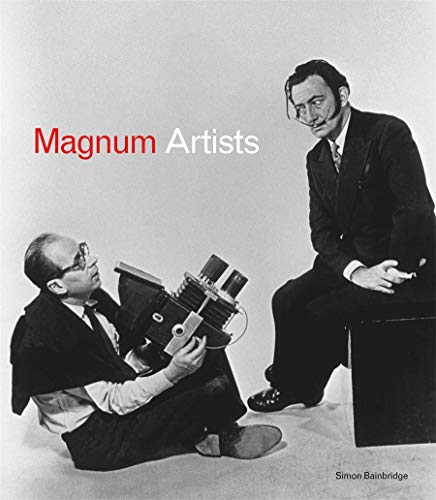 ”Magnum Artists is a must-have for the libraries of art lovers and photography aficionados everywhere.”

The timing of Magnum Artists could not have been more propitious. Whoever conceived this extraordinary book deserves a round of applause for their perspicacity.

We are currently caught in a time of disease and doubt. Given that predicament, it is a particular pleasure to hold in one’s hands a positive testament to the brilliant and creative minds of many of the great artists of the 20th and 21st centuries.

The portraits of these artists are captured by the brilliant photographers of the Magnum Photo collective, many of whom would become world famous themselves. Magnum Artists spans 80 years of photographic portraiture of the highest caliber.

The creative spark of the artistic mind, as seen through these portraits, is difficult to extinguish despite the wars, pestilence, and pandemics of their lifetimes. The artists pictured within Magnum Artists are lighthouses of hope cutting through the fog of their era to assert that art is a life raft for our humanity when the seas get rough. The search for beauty or truth through artistic expression is a flame that proves difficult to extinguish through the decades.

Most of the 120 artists who are photographed are world famous, but there are many whose careers are lesser known. The majority of the artists are captured as solitary individuals in the sanctity of their studios and homes. Their studios quite often are a perfect reflection of their artistic personalities. Some working environments are chaotic and disorganized while others are neat or austere.

Whether famous or below the radar, established or emerging, these artists are individuals trying to make sense of their times and their emotions, to create art from anxiety like a Diane Arbus or to be inspired by love and romance like a Marc Chagall. The artists were all captured at work or at rest, in all their complexity and contemplation, by the photographic luminaries who were members of the Magnum Photo agency.

Arranged alphabetically, the artists depicted can be humble or hungry for fame. Some are reluctant subjects; some project gigantic egos. Some crow while others cower in front of the camera lens. But each is committed to their craft and to finding a wide audience for their artistic vision. They are all dedicated to establishing their place in the artistic pantheon. Some will make it to the top while some will lose the battle for recognition. The artists’ studios, homes, and their working environments are the foxholes they inhabit in the war for acceptance, achievement, and fame.

The reader will find that the big kahunas are all included. There’s Pablo Picasso in Paris in 1944 during World War II as captured by Herbert List. Henri Matisse is recorded in his studio in Nice by Henri Cartier-Bresson also in 1944. Cartier-Bresson also photographed a fragile, bird-like Pierre Bonnard in his studio on the Cote d’Azur that same war-torn year. Roy Lichtenstein is photographed in his studio in 1986 by Thomas Hoepker in a surprisingly humorous juxtaposition of a neat, prim, and composed man amidst a riot of colorful three -dimensional cutouts.

Two portraits jump from the page. The strongest and most insightful image may be that of a frail, wheelchair-bound, Frida Kahlo who is shown painting at her easel in Mexico in 1954 as documented by Werner Bischof. Kahlo is beautiful and determined, although we learn from the text that she is in the last months of her life. A young Frank Stella, in his Manhattan studio in 1977, also captured by Thomas Hoepker, is teetering on the brink of fame and acclaim. Stella luxuriates in a cheap reclining chair, cigar in hand, as he gestures toward an unseen work and an uncertain future with his index finger.

The reader will encounter, among others, Georges Braque, Joan Miro, a young Lucien Freud, Salvador Dali through the years, Alexander Calder, Andy Warhol, Louise Nevelson, and Louise Bourgeois. There are enough artistic fireworks to compete with a July 4th celebration.

There is a marvelous introduction by the esteemed arts editor, Simon Bainbridge, which eloquently sets the stage for the photographs to follow. Each artist’s section is also accompanied by an enlightening anecdotal text which gives a richer meaning to the photographs and to the lives of the artists.

One can certainly criticize Magnum Photos from a contemporary perspective. It is relevant to note that there are few women artists included. Male artists are disproportionally represented. Where are Cindy Sherman and Agnes Martin, for example? Artists of color are also few. Looking at Yves Klein in 1961, photographed by Rene Burri, while Klein uses naked women as “living paintbrushes” certainly feels sexist, exploitive, and a bit creepy in 2020. Also, Magnum Photos did not have many female members over the years. Only Inge Morath and Susan Meiselas are well-represented in this collection. These observations are important to note, and they certainly have significance from our current viewpoint, but they do not diminish the overall impact and power of the book.

As much didactic as descriptive, Magnum Artists pulls no punches in its encyclopedic attention to its subjects. Not lacking in size, heft, or ambition, Magnum Artists is a must-have for the libraries of art lovers and photography aficionados everywhere.