Madness in Civilization: A Cultural History of Insanity, from the Bible to Freud, from the Madhouse to Modern 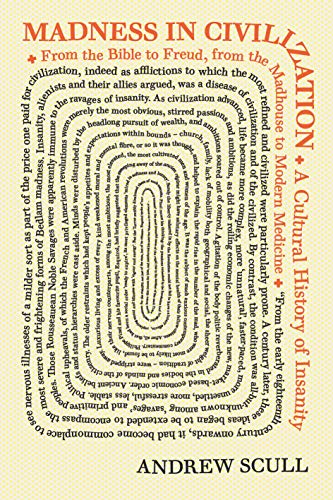 “this book will remain the premier anthology of insanity for some time to come.”

The first thing noticed when picking up Madness in Civilization: A Cultural History of Insanity is that it is a big book; a casual perusal will reveal a well annotated, scholarly volume. Reading it thoroughly, the reader may well find that the book becomes more engaging the further it is read. The book is filled with well told vignettes of people, places, and events with multiple illustrations that add variety to the text. This book is not likely to be beach reading, but it is arranged in short segments for easy pause and restart.

The author is well versed in the subject and readily captures the reader’s attention. Adding richness to the written tapestry, Dr. Scull illustrates trends with the art and literature of the day, including books, paintings, drama, photographs, and movies.

What is most impressive is that Professor Scull is able to present the history of insanity (or as he calls it “madness”) through several thousand years. He chronicles how insane individuals have presented a paradox for civilizations throughout history. Families, community leaders and eventually physicians have been confronted with the fact that “mad” persons cannot be ignored, either because of irrational behavior, or because they have been an embarrassment to wealthy and royal families.

Placing seriously mentally ill persons out of mainstream society was not as much of a problem as what to do next once they were there. The story of madhouses for the morally disreputable to asylums to hospitals is the history of psychiatry itself.

Dr. Scull demonstrates that even for well-meaning and intellectual individuals, the etiology of madness has never been truly known. Efforts to rehabilitate such persons has been at the whim of a particular civilization, a particular ruler, or more recently, the theory most in vogue as to what caused the problem.

“Mad” individuals were first seen as inherently evil, possessed by the devil or evil spirits. They were jailed, kept in chains and required a religious solution. Gradually, societies came to believe that mental illness was caused by abnormalities in the body (such as an imbalance of the four “humours”) and later as a brain disease.

With no methodologies to adequately assess or remediate these mind/body problems, asylum directors used a variety of methods which, from the perspective of the 21st-century, seem almost ludicrous: phrenology (the evaluation of bumps on the outside of the skull) or the process of seeking imperceptible tears to the brain and spinal column. Many thinkers viewed madness as a fundamental degeneracy in which the individuals were seen as defective, week, terrified, and decrepit.

When insanity finally was seen as disease of the brain or mind, the first comprehensive theoretical structure emerged: Freud’s system of ego, id and superego, central to psychoanalytic thinking and the practice of psychoanalysis.

For much of the early 20th century this treatment was rapidly adopted not particularly because it was successful in resolving serious mental illness, but because, according to Scull, psychiatrists could practice psychoanalysis comfortably in their office, generate significant income, and avoid the rigors of working in an asylum.

With the clarity of hindsight, the deficits of psychoanalytic theory emerge. Its principles of symbology, dreams, and mental meanings held sway for 50 years and dominated the training and practice of psychiatrists. Since psychoanalysis was notoriously ineffective in asylum situations, various other antiquated treatments, such as inducing a coma through high dose insulin and ice baths, were in common use.

The advent of Thorazine in the early 1950s was revolutionary. A specific medication was found that could dramatically improve symptoms of psychotic individuals. As with other medications to come, Thorazine was labeled as a “miracle drug” that would solve the problem of insanity. Unfortunately, not all patients could be treated with the drug or those who improved developed significant and debilitating side effects.

The next wave of medications in the 1960s were the tricyclic antidepressants. Some patients with depression dramatically improved, so that these medicines were also seen as the new panacea. A variety of other medications including lithium, Valium and Prozac were each in their day hailed as major breakthroughs in the understanding and management of serious mental illness. While each of these medications helped some patients, no one treatment cured the majority of patients or led to a fundamental understanding of the underlying pathology.

This book has many strengths, not the least of which is exemplified in the last quarter of the text. Here, the author is able to give an unbiased assessment of the times in which we now live. He shines an exceptionally lucid light on the practice of psychiatry and the treatment of the insane in mental health hospitals. While praising the benefits of new medications and humane treatment, the author simultaneously critiques psychoanalytic theory and the movement of patients out of state hospitals and into the community.

Another major strength is its ability to chronicle how the seriously mentally ill have been flung from pillar to post with little understanding why it should be so. Even with the best of intentions, each generation has tried to confront this vexing problem when even the best minds of the time do not understand the underpinnings of the problem. The recent trends du jour—molecularly based psychobiology, and the unraveling of the genetic code—carry hope for understanding the roots of madness. These may however, only be the latest waves of “understanding” that leave us still struggling to treat these unfortunate individuals.

This book is not always easy to read, but is well worth pursuing. In the early portion of the text, the author seems bent on chronicling civilization in general rather than limiting himself to the specific aspects of civilization as they affect the assessment of insanity.

Perhaps the greatest strength of this book is experienced by the reader after completion.  It is then that we see the recurring patterns of “new” ways of understanding mental health Institutionalization and treatment based on the most recent wave of “certainty,” but are ultimately found to be wrong, unhelpful, and at times inhumane.

The breadth, depth and well-written tapestry of Madness in Civilization make it unlikely that anyone will attempt to write another book of this type in the near future. Dr. Scull has done an excellent job, and this book will remain the premier anthology of insanity for some time to come.