Madame Tussaud: A Novel of the French Revolution 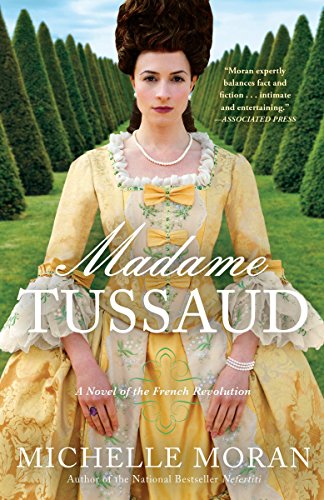 Over 200 years ago, the residents of Paris spent 12 hard-earned sous to walk through a little wax museum on the Boulevard du Temple, in order to be titillated by the well-molded figure of the courtesan, Madame du Barry. Remind yourself of that the next time you slip sheepishly into Madame Tussaud’s to get a peek at the new Lady Gaga.

That same Parisian museum—a prototype of the famous wax museums that now pepper the world—was the apprentice-shop of the future Madame Tussaud, who is brought to life in this well-crafted, fast-paced novel by the talented Michelle Moran.

It is said that on his deathbed, King Louis XV of France muttered the prophetic statement: “après moi, le deluge,” after which the flood did indeed come. Less than 15 years after his death, the Bastille fell, and the bloody deluge of the Revolution swept away his grandson, the king, as well as a good portion of the French population.

Madame Tussaud proves to be the perfect dry little island upon which to chronicle the chaos of those years. Her three brothers were Swiss Guards, a private army that protected the king. As a waxworks tutor to the king’s sister, Marie was an eyewitness in Versailles as news of political uprisings filtered to the baffled and indecisive monarch. And as the niece of a wily Swiss immigrant who held weekly political gatherings, Marie broke bread with Camille Desmoulins, his future wife Lucile, the tattered and dirty Marat, and the well-kept but frighteningly paranoid Robespierre.

As the Revolution begins, poor little Marie finds herself dancing delicately among the demands of these shifting powers. Marie was sympathetic to the royal family, who are here portrayed with far more kindness than the idealistic young writers, poets and lawyers who yearned for liberté, egalité, fraternité. But the exigencies of making a living in a starving Paris, the compulsion of her own ambition, and the necessity of showing overt patriotism in order to avoid Robespierre’s paranoid eye—all require Marie to subsume her own opinions as she changes the focus of her museum from tableauxs of Versailles to a showcase of the glories of the Revolution.

In the process, this fabulous novel becomes a narrative history of a savage, savage uprising: a Revolution in which Marie becomes, in the end, the unwilling go-to gal for the fabrication of wax death masks—for patriotic display—of the severed heads of guillotined luminaries.

It is this tremendous transition from a young, ambitious Marie yearning to join the famous French Academy, to a frightened—but secretly defiant—tool of a tyrant that forms the strong spine of this novel. Michelle Moran has done what few novelists have been successfully able to accomplish, and that is to depict the full range of the swift political changes that occurred in the few years from the fall of the Bastille to the beheading of the king. In her hands, the crazed tumbling of icons makes sense when woven so securely in the frame of the chillingly despotic personalities involved.

Madame Tussaud promises to be a breakout book for this talented writer—a novel that is both a gripping fictionalized biography of a intriguing woman and a well-paced, illuminating chronicle of the French Revolution.