Madam: The Biography of Polly Adler, Icon of the Jazz Age 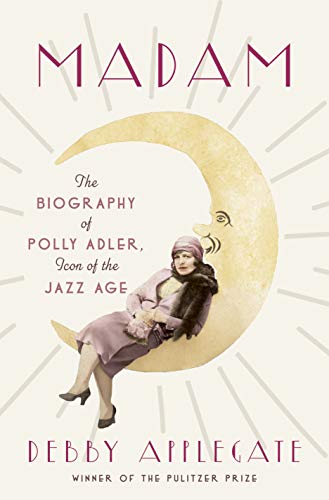 “Applegate’s well written and exhaustively researched biography of Polly Adler offers unique insight into a remarkable immigrant as well as the Roaring ’20s.”

For a quarter century, “Going to Polly's?" was a popular question among late-night partygoers in the know. Before his election to mayor in 1926, Jimmy “Beau James” Walker visited Polly Adler’s sex salon as did many late-night partygoers. Regulars included Robert Benchley, George S. Kaufman, and even Dorothy Parker of the Algonquin Round Table gang; Adler fondly recalled Benchley as “the kindest, warmest-hearted man in the world.”

Adler was born the daughter of Gertrude (Koval) and Morris Adler in Yanow, Belorussia, near the Polish border in 1900. Just before World War I broke out, her parents sent their 14-year-old daughter, Pearl, to family friends in Holyoke, MA. She arrived aboard the Naftar and began a new life in a new world; she did not see her parents and siblings again until 1928 when they, too, immigrated to the U.S. Looking for better opportunities, she moved to Brownsville, Brooklyn, living with cousins and working in a shirt factory.

In 1916 and not far from where Adler lived, Margaret Sanger opened the first—and short-lived—birth control clinic. Adler’s was a different story. At age 17, the factory foreman raped her. While rape may have been all too common in early 20th century Gotham (like it is today), Adler found herself pregnant and undertook the bold move of having an abortion.

Her family and the tight-knit patriarchal Jewish community of Brownsville shunned her because of her decision. In defiance—and through a classic topsy-turvy immigrant story —Pearl relocated to Manhattan, renamed herself “Polly” and became part of city folklore. The life she created mirrored the city’s commercial sex scene during the first half of the 20th century.

Adler, a small woman standing only 4’ 11,” was a spitfire who found her way into the prostitution racket by chance. Landing in Manhattan from the wilds of Brooklyn, good fortune—some would say chance—enabled her to move in with a young woman living in an apartment on Riverside Drive, on the Upper West Side. There she met actresses, showgirls, and gangsters, forever breaking with her past.

In 1922, Adler was hired by a bootlegger to procure women for the flesh trade; a quick learner, she started to freelance. “Soon I was meeting a lot of money men and when I saw the way they flung dough around I thought to myself: Why shouldn’t some of it be flung my way?” she reflected. She continues, “So I gave my address to the one who I thought would be discreet, and it wasn’t long before three girls were coming in several nights a week to entertain acquaintances I had made along the Great White Way.”

Early in her career, Alder was busted in a police raid for running a “disorderly house.”  This, her first arrest, shook her, and she tried to go straight, opening a lingerie shop that, unfortunately, failed. She returned to the flesh trade. From the Roaring ’20s until the early ’50s, Adler ran a number of Gotham’s most celebrated, upscale bordellos, sometimes called “parlor houses” or brothels. She was a distinct city character, a very New York outsider.

Adler became the talk of the town, a celebrity that only the Roaring ’20s twin movements of moral rectitude—alcohol temperance and sexual abstinence—could produce. To keep her houses of ill repute operating, she regularly offered payoffs, whether in cash or sexual favors, to New York vice cops, politicians, and gangsters— which they all gladly accepted. With the onset of the Great Depression, she was a media darling regularly mentioned in Walter Winchell’s columns.

Adler was a self-made woman who found fame and fortune following a path well-trod by others, including Sophie Tucker and Mae West. These women were often daughters of immigrants arriving in the US around the turn of the 20th century. They matured to adulthood as part of an historical wave of “new women” who redefined acceptable sexuality and built careers promoting female sexuality.

But Adler, as distinguished from Tucker and West, sold the sexual favors of other women as opposed to selling herself, whether as raw talent or a suggestive fantasy.  Tucker and West successfully pushed the limits of popular culture to establish a new female aesthetic standard; Adler’s career promoted commercial sexual exchange that, nearly a century later, still remains illegal, with the rare exception of parts of Nevada and decriminalization in some states. Adler was busted 13 times, a casualty of what she called “quota raids.”

In true Godfather or Boardwalk Empire fashion, her contributions to the payoff grabbag were filtered upward through the police apparatus and the Tammany machine. She knew how to play the game and how to keep secrets. Everyone also knew of her close, professional and personal relations with some of the city’s mob bosses, notably Arnold Rothstein, “Dutch Schultz” (aka Arthur Flegenheimer), and Charles “Lucky” Luciano.

Adler’s bordellos welcomed an assortment of notables including a US Senator, famous male and female writers, movie stars, prominent men about town and even “a member of the White House inner circle.” While there have been numerous reports about Franklin Roosevelt having sexual affairs outside of his marriage, one of Applegate’s most controversial revelations involved FDR. Drawing on a story told her by a friend of Polly’s, the author notes, “she [Adler] said that FDR was one of her clients and that she was being taken care of for the rest of her life by the contribution of Democrats.”

In her 1953 memoir, A House Is Not a Home, ghostwritten by Virginia Faulkner, celebrities visited Polly’s bordellos for more than sex. One night, after hosting a grand dinner party, Adler brought on the night’s entertainment that included “three queer boys who were completely in drag, with wigs, false eyelashes, high-heeled pumps and beautiful evening gowns.” She reports, "money also supplied reefers and cocaine and morphine so that the 'upper clawsses' could have themselves a real low-down time."

Applegate’s study is an excellently researched tour of Gotham’s underworld during the Roaring ’20s and the couple of shortcomings do little to undercut the book’s value. The opening sections on the early 20th century New York sex scene would have benefited from a discussion of Comstock laws of 1873—named after Anthony Comstock—that made it illegal send “obscene, lewd or lascivious,” “immoral,” or “indecent” publications through the mail; it was in effect until 1965. “Small’s” jazz club in Harlem was named after Ed Smalls and was “Smalls Paradise.” And, sadly, while Adler’s bordellos are often noted as welcoming apartments for socializing as well as sex, there is only one in-depth description of one of these gathering place, this one her 12-room apartment on 55th Street and Madison Avenue.

Applegate’s invaluable contribution is simple if provocative. “Prohibition’s excess enshrined the gangster as an American archetype, whose lordly ambitions and tragic flaws are considered essential to understanding our national character,” she writes. “But there is no corresponding myth of the female outlaw who uses sex as her weapon against the world.”

And Applegate adds, “If she [Adler] has not received her historical due it is, in part, because she is a symbol whose reality contradicts the very myths that make this era so captivating and charismatic.” Applegate has given Polly Adler her historical due.