This Machine Kills Secrets: How WikiLeakers, Cypherpunks, and Hacktivists Aim to Free the World's Information 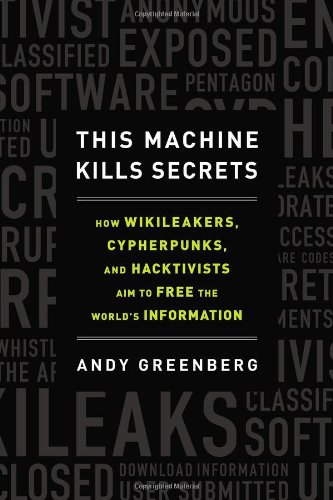 Let’s start with the positive: This Machine Kills Secrets: How WikiLeakers, Cypherpunks, and Hacktivists Aim to Free the World's Information
will most likely stand alone for many years as one of the most comprehensive books on the subject of modern whistleblowing and cryptography.

Author Andy Greenberg has spent his career writing about technology, most notably for Forbes magazine as well as Forbes’ The Firewall Blog, so it’s certainly a topic he knows well.

It’s also a place where he had the means to meet newsmakers, made clear when he was the first to feature a cover story on Julian Assange of WikiLeaks. This also becomes apparent in This Machine Kills Secrets when Mr. Greenberg seems to be able to get an interview with almost every notable player in the world of idealists, anarchists, extremists including major players like the aforementioned Assange, as well as the likes of Phil Zimmermann, creator of the (in)famous PGP data encryption/decryption program.

Moreover, the stories that Mr. Greenberg weaves are compelling as the personalities of otherwise dry technology players are put front and center. Consider the disdain that hacker Jacob Appelbaum of WikiLeaks holds for Tim May, a founding member of the Cypherpunks electronic mailing list, whom Appelbaum calls a “fucking racist.” Appelbaum, in turn, is quoted as saying that “[t]he idea of trying to be Julian Assange gives me the creeps,” when it’s pointed out that Appelbaum could have created WikiLeaks. Scenes like these breathe life into what might otherwise be a dry and dusty tome on an arcane subject matter.

And there can be little doubt that the subject matter matters. In an age when incredibly powerful technology is available to just about everyone from PGP to the TOR network to even the now pedestrian Twitter, the political and personal implications of these technologies are only now beginning to be understood.

All this is pretty impressive for one’s first book; however, as a negative, This Machine Kills Secrets reads a bit like it’s the author’s first book.

There is a sense that Mr. Greenberg’s reporting background both aids and hinders him as he tells his story. This is not necessarily his fault so much as the volume of information regarding these disparate players and technologies.

While the book manages to grab you with its deft opening comparison between Dr. Daniel Ellsberg of the Pentagon Papers and Bradley Manning of WikiLeaks and its observation of their very different fates, the narration loses steam as does the reader’s attention under the weight of subsequent minutiae. A little less detail might have gone a long way in keeping the momentum that Mr. Greenberg built up early on.

Still, it’s a story that needs to be told and few are as qualified to tell it as Andy Greenberg. If you have any interest in finding out just why sites such as WikiLeaks and the players that implement them matter so much, there is no better place to start than This Machine Kills Secrets.