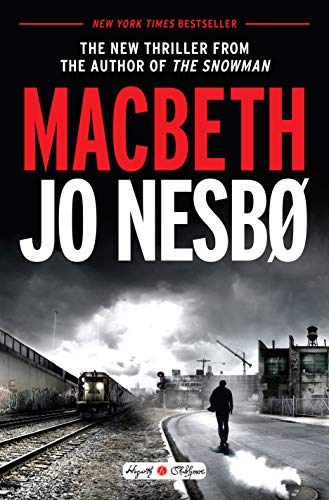 It is said that imitation is the purest form of flattery. Be that true, the question becomes what hold does a feeble imitation of a literary classic have on flattery. Shakespeare should not at all feel flattered by Macbeth, authored by Jo Nesbo. Macbeth circa 2018 transports the entire cast of Macbeth circa 1611 to a grimy, fictionalized Scandinavia circa 1970. There they are abandoned, bereft of color and substance.

Macbeth 2018 supplements murder and death by dagger and sword with indiscriminate Gatling machine gun fire. (Yes, it seems along the 400 year time tunnel trek from 1611 to 2018, Macbeth stopped in on the 19th century for arms.)

By 2018, Scottish kingdoms have shrunken to police precincts in an unnamed Norwegian town. Thanes of the Scottish realms have been demoted to police detectives. Their castles have been modernized and house gambling casinos. The wonderful witches brew of newt eye and frog toe turns out to be a recipe for common street meth. Oh, the shame that awaits Shakespeare’s magnificent characters in 2018. It turns out they were not immortal after all.

Jo Nesbo has talent and creativity in many fields. The book jacket declares him to be a musician, songwriter, economist, and writer of many books. The internet proclaims his books have sold 30 million copies worldwide. Among those books are a successful children’s series as well as popular Scandinavian crime noir novels. At least one of those novels was adapted into a movie. He has been a skilled footballer (soccer player to Americans). He is also, it seems, a man of mystery. The mystery which cloaks him is why he chose to party with Banquo’s ghost. Will he next seek to exhume the skull of Yorick?

With few minor modifications, the Macbeth 2018 citizens are the far lesser clones of their 1611 ancestors. They did not fare well in the time machine. They lack the flawed nobility and humanity of their 1611 counterparts.

By 2018 they are reduced to action figure caricatures of waring drug lords. More importantly, we already know what happened to each of them in 1611. And their story doesn’t change in 2018. Enhanced technology does nothing to enhance the perfect plot devised by Shakespeare. If anything, the setting of 1970 Scandinavia makes unbelievable the chanted prophesies of witches from 1611.

The vivid mental image of Birnam Wood marching on high Dunsinane is far more engrossing than that of a long dormant train locomotive named Bertha suddenly springing to life and slamming into the casino which has become the final fortress of Macbeth. Moreover, what is the audience demographic that would find improvement to Shakespeare’s story by removing it to the criminal side of 1970 Scandinavia, or to 1970 anywhere for that matter?

Mr. Nesbo, a man of proven creativity, co-opts the splendid tale of Shakespeare’s Macbeth and roughly plops it into the fog and filthy air of 1970 Scandinavia. Left forever unanswered by the novel is why he went to all the trouble, all the sound and of the fury to produce a work that signifies nothing.