The Lust for Blood: Why We Are Fascinated by Death, Murder, Horror, and Violence 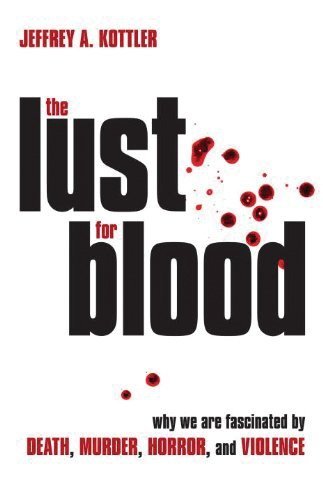 Popular psychology books seem to always sell big. In many large bookstores they have their own section labeled self-help or psychology. Psychology as a science, however, has the exact same problem that books on physics, medicine, or any number of science related fields have: Explaining complicated theories and methods in a way that the layperson can not only understand but will want to read. Too often the results are a dumbed down version of the field of study, stripping the book of any hard science or math, rendering it almost unreadable for anyone with even a rudimentary knowledge of the topic.

Scholarly fields of history, sociology, psychology, and related subjects can be immune to this because they are by their very nature interesting to people for they are about us—people. But even in these fields, popular books can be guilty of stripping away too much of the research in an attempt to be engaging. Balancing is possible, but requires a concerted effort.

Jeffrey A. Kottler is the author of over 80 books on psychology, some of these popular, some more academic. This is quite an accomplishment for any lifetime let alone someone who is active in the field as both a professor and a counselor. The Lust for Blood: Why We Are Fascinated by Death, Murder, Horror, and Violence is his latest popular examination of a subject that cuts through all layers of our society by asking why we seem fascinated by the morbid, the aggressive, and the downright nastiest aspects of life.

The book has three general sections. The first claims to explain why the “average” or “normal” person is interested in horror movies, violent crimes, aggressive sports, serial killers, and even traffic accidents.

The first thing we need in such a discussion is a representational sample of the population that has not been convicted of crimes and frankly which isn’t involved in crimes. While Mr. Kottler mines other studies he has conducted and the numbers of interviews he did for them, he never gives us that information for this study. This is a serious problem, because without a solid and demonstrated methodology, how can the author’s theories be accepted? We don’t need a detailed list or reams of statistics, but a nice appendix with a chart of the general characteristics of interviewees would be helpful, if not downright illuminating.

For some reason, history is brought into the discussion from the very second chapter and with mixed results. Generally, Mr. Kottler has a basic grasp of why certain violent activities happened in the past, and this he gleans from general books on the subject also written for a less than scholarly rigorous audience. For historians or history buffs, this will constitute a challenge, especially when the author attempts to draw parallels not only to the past but also contemporary events.

What we get in this first section then is more anecdotal information in place of statistical variations as to how many serial killer groupies want to really have a relationship with the criminal versus those who like the power they feel from taunting a caged beast, for example. However, the few interviews that are quoted or mentioned do not seem to undermine some stereotypes such as horror movies enforcing gender roles, especially when several of the women cited say they felt empowered or even that they watch the movies alone. Since we don’t know the details of the overall pool of interviewees, we are left with conflicting statements that are not balanced by breaking the responses into groups even a layperson could understand.

The second section of the book is very short, and examines the motivations and reactions to violence for those in jobs where they must perform or confront murder, death, and mayhem.

Kottler looks at a few different categories of professionals. The focused study is interesting for its quotations, but again lacks statistical generalizations or acknowledgement of how many interviews were conducted. The author mixes in these professional experiences with supposedly average people’s responses, leaving us confused as readers as to what point Mr. Kottler is trying to make.

The final four chapters are the section about theory, in other words, an examination of previous research, some of which Kottler has cited in earlier chapters. Placing this section at the end of the book is a brilliant move because it allows the reader to be captured by the topics and interviews before getting deeper into scientific jargon or study.

Here we see the charts and discussions that could have helped the previous chapters. Since it lays out the studies and argues for or against them—often with increased complexity—this is the best section of the book by far.

Throughout the book there are dozens and dozens of photos. Some of these compliment the topics while others felt rather gratuitous. Adding photos of any type, black and white or color, substantially increases the cost of a book; so why not make sure they contribute something worthwhile, adding more information as opposed to amping up the thrill of the violence they represent? As well, many of the movie and television images are decades old, so younger readers may frown trying to figure out how anyone could be moved by such old-fashioned naïvete.

Ultimately while The Lust for Blood is an engaging read, it fails to provide a solid scientific foundation for the core explanations as to why a “normal” or “average” person enjoys horror, violent activities, and anything involving the death of others. By failing in this way, Mr. Kottler misses an opportunity. His book would have carried more gravitas had he adhered to at least a modicum of scientific methodology—and if he did, to have let us in on that fact.