Luli and the Language of Tea 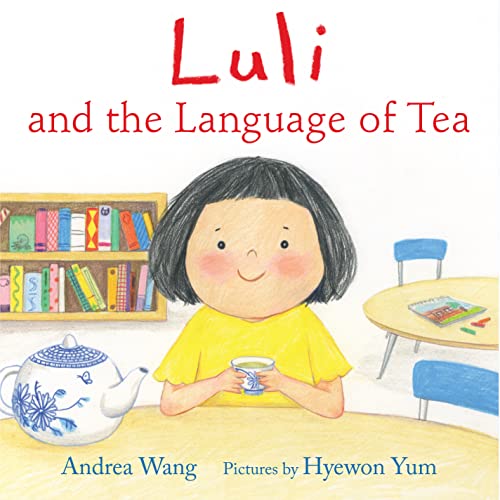 “Wang and Yum have created a delicious story of humanity accessible to all readers, inspiring us all to raise our teacups and share a toast to Chá!”

“The playroom was quiet. Luli couldn’t speak English. Neither could the others. All around the room, children play alone.” And so begins this charming story, Luli and the Language of Tea, by Andrea Wang, Caldecott Award Winning author (Watercress, illustrated by Jason Chin). Set in a free childcare center where parents are taking classes in English as a second language, children from many different countries gather each morning—in silent, parallel play. Feeling lonely after days of playing by herself, Luli has a plan. A tea party.

After assembling the teapot and cups she’s brought from home, and steeping the tea, Luli takes a deep breath and in her native Chinese she calls out to the others, “Chá!” Heads pop up. In their respective languages, the other children respond with their word for tea, Maxim in Russian, Anya in Hindi, Kerem in Turkish, Nikou in Persian, Hakim in Arabic, Valentina in Spanish, Matthias in German, Tishala in Swahili, and Pedro in Portuguese—and these words are remarkably similar. “The tea was ready. Luli beamed. She was ready. “Chá!” she beckoned. All around the room, children joined together.

Wang’s language is simple and sparse, matched with childlike pictures in colored pencil by Ezra Jack Keats New Illustrator Award Winner Hyewon Yum—a perfect fit to capture the warmth of this lovely classroom gathering. As the children take their chairs around a circular table, Luli pours the first cup and then another and then another, and the children pass the teacups to one another. Oh, no! Everyone has tea except for Luli. Hurray! The children get creative. Each child pours a bit of their tea into Luli’s cup. “Now everyone had a share. Hands curled around warm cups. Mouths curved into shy smiles.”

Luli takes another breath and pulls out a surprise! “She held up a box and spoke her new favorite word. In English. Cookie?” As expected, the playroom went from quiet to excited as the kiddos delight in their cookie surprise. With the children now engaged with one another, this quaint story ends with a wonderful sentiment, “Luli’s teapot was empty, but her heart was full.”

Wang presents her inspiration for writing this book in the backmatter, sharing her first-generation story. Her parents were born in China and immigrated to the United States, where they both helped others who couldn’t speak English. In their home, every visitor was offered tea and snacks. Wang also tells the history of tea in the world, “According to legend, tea was invented in China around 2700 BCE. (That’s over 4700 years ago.) As people around the world began to trade with China, they took tea and the word for it back to their homes. Over time, the pronunciation in different countries has changed, but not too much.” And in a lovely touch, Wang shares how tea is drunk in countries around the world—with Yum adding beautiful renditions of colorful teacups from Morocco to Chile to India to Kazakhstan.

Luli and the Language of Tea is a heartwarming story of finding the common thread that joins people together. In this case, it’s tea. Luli uses her love of tea to connect with her peers, and they readily join her. Wang and Yum have created a delicious story of humanity accessible to all readers, inspiring us all to raise our teacups and share a toast to Chá!