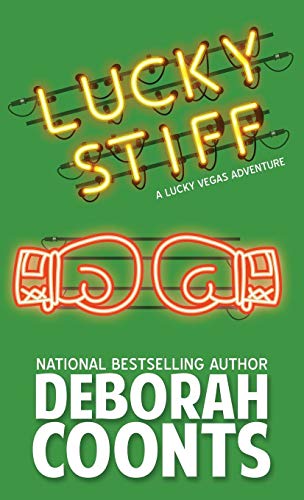 Cocky, streetwise Lucky O’Toole returns (following last year’s much-praised Wanna Get Lucky?) for another off-the-wall adventure in Las Vegas, where off-the-wall is absolutely normal. As the Head of Customer Relations for Babylon, one of the most sybaritic, over-the-top hotel/casinos in town, Lucky brushes shoulders with celebrities and lowlifes—often simultaneously.

So it’s all in a day’s work to clean up a tractor trailer full of bees that jack-knifed in front of the hotel, keep the press away from the former Middleweight Champion so he can rest up before the big fight, oversee the development of Babylon’s posh new gourmet burger joint, enjoy her sexy musician boyfriend Teddie, and keep everyone else on schedule—all while solving a murder.

This time the corpse--a messy one at that—is one “Numbers” Niedermeyer, a local bookie unceremoniously dumped in the shark tank during feeding time at the nearby Mandalay hotel. Needless to say, it wasn’t quite the entertainment the tourists were expecting.

Technically it’s a Mandalay matter, but Lucky’s friend, the Beautiful Jeremy Whitlock, “Las Vegas’s ace Private Investigator,” is the prime suspect, and it’s up to Lucky to get him off the hook by finding the real murderer. Which would be a lot easier if Lucky didn’t have to juggle her investigation while trying to do the job she’s actually paid to do.

Worse yet, Teddie’s away in L.A. striking it big in the music industry and a sexy pop star seems to have her sights set on him. Meanwhile Lucky’s mom, Mona, owner/manager of a notorious brothel, is bringing in tons of publicity with her plan to help a desperate young woman auction off her virginity to pay for grad school, and a good friend (who’s also a Hollywood heartthrob) wants her to help him come out as a gay man and plan his wedding to the love of his life.

With all these distractions, it’s no wonder the plot struggles a bit to hold together. Ms. Coonts is juggling enough characters to populate a small town, as well as too many plot threads that go nowhere. Elements that were charmingly screwball in the first book—like the fact that every guy Lucky knows is drop-dead gorgeous--get a little tiresome here, while others, like Teddie’s cross-dressing act, are nonexistent. And if Jeremy’s an “ace” PI, why does he need Lucky to solve the crime anyway?

Still, there’s plenty of value for your entertainment dollar, and the broad promise of more to come. Under the glitz and glamour, Ms. Coonts’s Vegas remains the small town with a heart of gold.