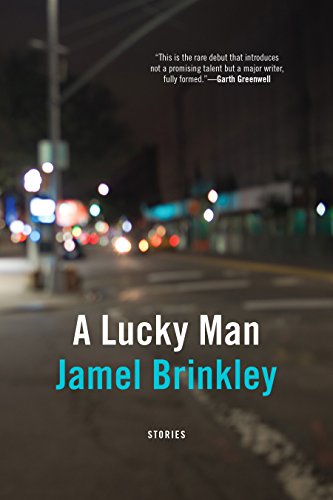 In paying close attention to the male gaze, Brinkley’s own vigilant observations both interrogate and subvert that gaze’s power. As many of the collection’s male characters attempt to or pretend to expose the women around them, their own vulnerabilities are uncovered. It is the men themselves who begin to seem naked and exposed, and, in this exposure, fully and tenderly realized throughout Brinkley’s stories.

In the collection’s opener, “No More Than a Bubble,” Brinkley’s interest in examining performances of masculinity immediately takes center stage as two college-aged friends try to pick up girls at a party. “We both preferred girls of a certain plumpness, with curves—in part, I think, because that’s what black guys are supposed to like,” says the story’s narrator. “Liking them felt like a confirmation of possessing black blood, a way to stamp ourselves with authenticity.”

When the two men walk two female roommates home, however, that objectifying gaze starts to collapse and the women take charge: They have the two male college friends strip naked and observe one another. “We had found our so-called wild and crazy women, and they slept with us,” the narrator says. “But first they made us look, for a very long time.” The friends are compelled by the women to openly observe one other, to be present in the moment they’re sharing. In turn, these stories compel readers to be fully present with Brinkley’s protagonists.

The male gaze isn’t the only form of power put into question in A Lucky Man. Brinkley casts awareness on the ways the black men and boys in his stories are also under the gaze of white authorities, of surveillance by the state. In the story “I Happy Am,” a group of city kids go to suburbs, expecting the Johnsons, a rich white family, to allow them into their luxurious home. When they wind up at the house of a black woman instead, the children are disappointed.

The woman tells Freddy, the story’s young protagonist, that the Johnsons “have these pictures up in their parlor, shots of all the groups from camps like St. Rita’s who have been up to visit and use their pool over the years. So many boys—brown boys, like you—just smiling all big and giving the thumbs-up, every one of them, like they were told to.”

Under the gaze of the white patron’s camera, the boys must perform exuberant gratitude. Sometimes in literary fiction, the opposite performance seems to be demanded: Writers of color, immigrant writers, and writers from working class backgrounds are often pressured to exclusively perform suffering and oppression in their stories and novels, as if those stories are the only important ones they have. What makes so many of the stories in Brinkley’s collection powerful is the way that, in addition to containing suffering, they also make space for joy, complexity, nuance. Many of the stories end on moments of surprising connection.

Take “Everything the Mouth Eats,” one of the fullest and most moving stories in A Lucky Man, which traces the strained relationship between the first-person narrator, Eric, and his brother, Carlos, both of whom have suffered sexual abuse as children. Carlos has found hope and a way forward in part through the practice of capoeira, the Brazilian martial arts dance. Watching Carlos and another man perform capoeira, the narrator notes, “He showed the man all of his vulnerabilities, just with the placement of a foot, a beautifully timed sweep to put him gently on the floor, letting him know that it isn’t such a horrible thing to fall down.”

The characters in A Lucky Man fall, sometimes again and again. But because Brinkley’s authorial gaze is one of curiosity, patience, and respect for his characters above all else, their moments of falling are not treated as spectacle. Instead these moments are complicated, human, and often lead to real beauty—especially when these characters get back up and, sometimes unsteadily, help each other stand.