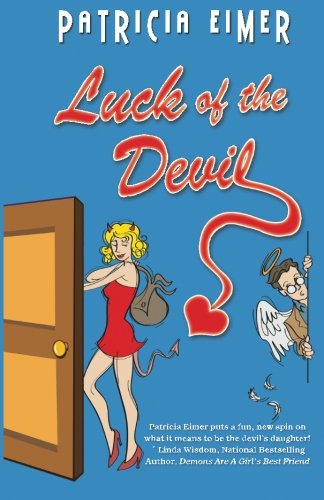 “Ms. Eimer’s twist on God and the Devil is genius. . . . Luck of the Devil is pure entertainment with satirical religious undertones that yield uncontrollable, giggles-worthy hilarity that simply adds to the fun.”

Faith Bettincourt is a pediatric nurse who also happens to be the daughter of the Devil. Exhausted from a long day, Faith is standing in an office with Lisa—also a nurse and Faith’s roommate—trying to figure out the solution to a problem: their boss’s semi-nude and wholly dead body at their feet.

Lisa, recently turned into a succubus by Faith’s half-brother Tolliver, is having a slight issue controlling her powers. Already a six-foot, smoking-hot goddess, becoming a succubus only made her that much more irresistible. To hear Lisa tell it, the whole thing was a simple misunderstanding: Things with Howard got out of a hand; she got hungry; she ate his soul.

Rather than face the wrath of her father, Faith decides they should just roll the body up in a rug and teleport it into a Dumpster. Their successful triumph is short-lived when photographs of the entire ordeal appeared in Faith’s bedroom, providing the first clue that she has a dangerous and powerful stalker.

Things get even worse when Faith’s family comes for an extended stay. Between her crazy, human, goddess-worshipping mother, her temperamental alpha demon father, an angry demon sister whose incubus husband just switched teams and went over to the light side—Faith has her hands full.

Last, but not least, there’s Matt, the very handsome and very single lawyer across the hall, whose mere presence turns Faith into a bumbling klutz; however, Faith will be with Matt sooner than she thinks when she is named suspect number one after two street kids OD on morphine that she reported missing from the hospital earlier that week.

Between everything going on with the mystery stalker and her incredibly dysfunctional family, Faith doesn’t think she has a chance with Matt. But just as she has her dark, immortal secrets, Matt may have a few of his own.

Patricia Eimer has a very fun and witty edge to her writing. Quick to draw in the reader, the story is very upbeat, fast moving, and often laugh-out-loud hilarious. Ms. Eimer sets the stage for a wild ride full of demons and other supernatural beings without compromising on quality or believability. Despite the evil nature of her characters, they are all very relatable and down to earth—and actually quite human.

Although there are a lot of stories out there featuring the offspring of Lucifer, never have they seemed so “normal” or in Faith’s case, so suffocated by the vast of amount of crazy that her family brings to her doorstep—literally.

There are a few plot holes and superfluous characters that should have been fleshed out a bit more, but they don’t detract too much from the story.

Additionally, Ms. Eimer’s twist on God and the Devil is genius. Instead of being sworn enemies, they are brothers—each ruling their realms of good and evil—thus keeping the world balanced. This, of course, makes Jesus Faith’s cousin, whom they call J, and who moonlights at different types of jobs: EMT, teacher etc. Apparently carpentry got too boring.

Luck of the Devil is pure entertainment with satirical religious undertones that yield uncontrollable, giggles-worthy hilarity that simply adds to the fun.