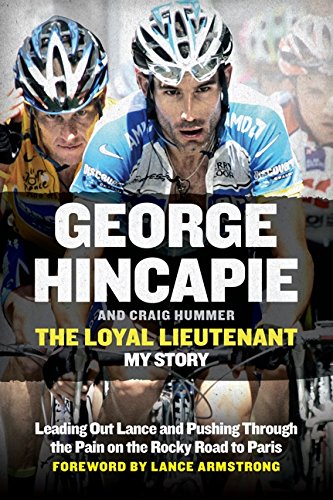 I try to stay on the positive side of things as much as I can, because I’m a positive kind of guy.  But once in a while, a book comes along that is so laughably obtuse that you just can’t give it a pass.

That book is George Hincapie’s The Loyal Lieutenant: Leading Out Lance and Pushing Through the Pain on the Rocky Road to Paris.

Hincapie rode with Lance Armstrong during the bad old times, when all the cyclists took drugs to compete in the Tour de France, and things really came down to “May the best cheater win.”

To his credit, Hincapie never turns against Lance, which has been the order of the day ever since Armstrong admitted how fraudulent he really was, lying to everyone from his closest friends, his co-author, the media, his foundation, and his millions upon millions of fans.

So Hincapie gets credit for loyalty, a virtue he considers so important that he puts it into the title of his book. But that’s really the only thing he does right.

Usually, when you read an autobiography or a memoir of a person who’s been in the public eye, you come away wishing that you could be that person’s friend.  How cool would it be to go biking with a Tour de France guy, or hang around Capitol Hill with a senator turned author, or climb Everest with an experienced mountaineer?

Remarkably, Hincapie’s book is so bloated with ego and lack of self-awareness that if you saw him in a public place, you’d turn and run the other way.

In case Hincapie himself hasn’t convinced you what a great humanitarian he is, he enlists others from the cycling community to tell you in brief asides how thoughtful, how caring, how fabulous he truly is.

As the expression goes, he has enough self-esteem for all of us.

Hincapie appears to offer absolutely no regret for taking drugs as an athlete.  But there’s nothing charming about his lack of contrition, as in the case of a Bill Romanowski. Romo, as the athlete and his memoir are both known, comes across as regretful over the choices he made and certainly would not want kids following behind him to put their bodies and even their lives at risk.

Hincapie apparently has no moral qualms about what he did.  He falls back on two shop-worn excuses: everyone was doing it; and gotta protect Lance.

Bicycling is a weird sport. There are no other athletic endeavors anywhere in the world in which everything stops because the entire group of competitors pulls over to take a pee break. You also don’t have quite the star system in any other sport as it exists in bicycle racing. You’ve got one main star, whether it’s an Armstrong or a Contador or an Eddy Mercx—where do they get these names, anyway?—and then you’ve got a whole lot of guys whose job it is to, well, you’d probably have to be Belgian to understand exactly what their roles are. But what they do is support their leader by any means necessary. And when Lance was winning seven straight Tour de Frances, it was by out-drugging the other guy.

What good are drugs in sports? As has been pointed out elsewhere, steroids, EPO, human growth hormone, and other substances don’t necessarily make you a better hitter, rider, or shot putter, for that matter. They can certainly make you stronger, but one of the main benefits is the fact that you can recover more quickly from athletic endeavor.

How is it that an athlete can push himself to maximum endurance and then bounce back in super human ways, only to do the same thing the next day, whether he’s competing in the Tour de France or in the pool at the Olympics? EPO, HGH, and the rest of the alphabet soup of performance-enhancing drugs allows you to recover so much more quickly than the guy who is not cheating. In a sport like the Tour de France, which drags on for three weeks, every edge makes a difference, and the biggest edge is recovering more quickly than the next guy.

Hincapie offers no apology for his role as a drug-taking, two-wheeling assistant to the master cheat, Armstrong himself. When he is forced to meet with Travis Tygart, the anti-doping crusader of the USADA, the organization entrusted with taking drugs out of sports, he has nothing but disdain for Tygart. Hincapie sees Tygart as simply a man with a mission, as if that were a bad thing. You’re right, George. He does have a mission. It’s to get people like you the hell out of sports.

The only time Hincapie actually seems to grapple with the moral implications of his acts is when he confronts the question of what he would tell his daughter. Again, remorse doesn’t come into the picture at all. Instead, he appears to fall back on his two tired excuses—everyone was doing it, and I had to protect Lance—as the message he would give his daughter about those days.

It brought to mind the response of Pamela Anderson, when she was asked how she would explain her sex tapes, then a novelty, to her kids.

“I’ll just tell them, ‘Back in those days, Mommy and Daddy videotaped everything.’” As if that explains anything.

I’m not asking for athletes, or anyone, to be perfect. I am asking for a modicum of self-awareness. If you lack that essential quality for writing a memoir, then don’t get a book deal.

No matter how fast you can pedal a bike.