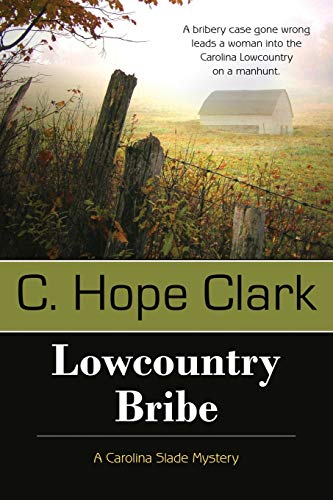 Ms. Clark debuts with a sharp novel combining all the right elements into a page-turner.

Lowcountry Bribe is a classic story of an ordinary person thrust into extraordinary circumstances. In this case, Carolina Slade, a loan manager for the Department of Agriculture, is one of those low profile folks who keep the wheels of commerce turning by helping struggling farmers stay afloat in the depressed economy of rural South Carolina.

One day a hog farmer she has long worked with offers her a bribe. It makes no sense, since he’s constantly behind on payment—yet suddenly he has cash to swap for favors. Despite misgivings, Slade decides that her job is at greater risk if she ignores the bribe than if she informs the proper authorities; so she follows her moral indignation and picks up the phone.

But before she knows what’s hit her, she’s slammed back to the wall with her life in jeopardy, her marriage in smoking ruins, and her children abducted—all because she played by the rules and reported an attempted bribe.

The agency in charge of investigation dramatically overreacts, bullying her and trying to spin the situation so that she’s the guilty party. Meanwhile they drop hints that the case links back to the suicide of Slade’s boss months before. What kind of Pandora’s box did she just open?

One agent, Wayne Largo, shows a human warmth beneath his official facade and reaches out to help her despite his own problems. Romantic sparks fly between them but both hold back—all for nothing, it turns out, as the onlookers in their respective worlds accuse them of getting unprofessionally close. This escalates an already worsening situation, made doubly worse when Wayne gets yanked off the case leaving Slade unprotected.

The home front simultaneously deteriorates. Slade’s husband, Alan, has turned into a sarcastic abuser constantly challenging her to file divorce papers. She hesitates only because of their children.

But his reaction to her turning informant finally provokes her into turning him out. No matter how many times she changes the locks, however, he keeps sneaking back into the house and starts to get violent.

So Doing the Right Thing attacks Slade on multiple fronts: a hostile husband, a hostile boss and coworkers, a hostile farmer out to get her, and a conflict filled relationship with Wayne. She’s saved from helplessness by a supportive family, but they can’t protect her from a driver trying to ram her off the road or from someone snatching her kids.

Outraged at her treatment by so many brutal men, Slade fights back—even when the effort is futile. The reader can’t help but share her anger and need to lash out, understanding when she turns into an avenging mama tiger protecting her young.

What makes this book work—aside from smooth writing, a rich sense of place, and a dastardly plot—is Slade’s realness. She doesn’t turn into a superheroine to blast through her problems. Instead, she does what we all do: holds on to her beliefs and rituals until absolutely forced to rethink them and change strategy. She gives trust until it’s so unwarranted that she must abandon faith.

Conversely, she withholds trust once burned until she must take a chance and allow someone to help her. She tries to take the high road until proven, irrevocably, that it leads to the wrong place, at which point she digs in and fights.

The book’s darkish tone leaves the reader uncertain whether the story will have a happy ending. Doesn’t seem possible: There are so many bad guys to take down, and such an impossible situation to resolve, that it’s hard to imagine how either the author or the heroine will pull it off.

Ms. Clark wraps up it all up with a bow, at least on the plot side. Because Lowcountry Bribe is first of a planned series, she leaves some relationship strings dangling to develop in future volumes.

We learn in this first book how much opportunity for crime exists in what appears a boring bureaucratic career. Then again, when there’s money involved, people’s livelihoods at stake, and nobody paying much attention, what better milieu for some under-the-radar fiddling?

It will be interesting to see what Ms. Clark comes up with next to challenge Slade.