The Love Songs of W.E.B. Du Bois: A Novel 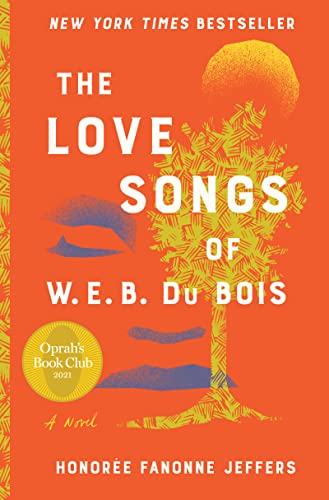 “The Love Songs of W. E. B. Du Bois is a serious novel, a terrible but ultimately uplifting saga . . .”

The Love Songs of W. E. B. Du Bois is the debut novel of respected poet Honoree Fanonne Jeffers. At more than 800 pages, it is a sprawling epic, charting African American history from slavery onward. The title recalls T. S. Eliot’s The Love Song of J. Alfred Prufrock, seeming to juxtapose the solipsistic worries of a middle-aged white man with the life and death struggles of Du Bois’s “Black Folk.” Note also that Prufrock has just one song. Du Bois and his people have many. These songs, or stories, are complex and often horrifying. To tell them, Jeffers uses two alternating narratives reflecting what Du Bois called the “double consciousness” of Black people: African and American.

The first narrative, Song, tells the intertwined story of two oppressed peoples: Native Americans and African Americans from their earliest connection in this country. The second, documents their ongoing travails through the history of one Black family from Chicasetta, Georgia. Chicasetta, originally called The Place In The Middle of the Tall Trees, was stolen by a white man from its Native American inhabitants to become a plantation, a place of African American enslavement. Song, is particularly affecting with its relatively small cast of characters, sense of place, and of a cruel history couched in lyrical prose: “Tears and sleep were not luxuries cast to slaves. There was only work. Work when the cock crowed for work. When the sun rose for work. When the sun fell until the stars cut the dark.”

The second narrative has a wide-ranging cast of characters and is told in the first person by Ailey Pearl Garfield. Ailey Pearl, growing up in the late 20th century, moves between an unnamed city and her mother’s family in rural Chicasetta. As the daughter of educated parents, she is a member of what Du Bois termed “the talented tenth.”

In this section, Jeffers has taken on the monumental task of presenting African American history from Jim Crow and the Civil Rights Era to the present through the lives of Ailey Pearl and her family. This places a large burden on the narrator. At times she, and the other major contemporary character, her great-uncle Root, a respected professor at a Georgia HBCU, can get lost in exposition; however, Jeffers makes up for this with a large and varied supporting cast, especially the women of Ailey’s extended family: Lydia, Ailey’s beloved sister and childhood defender who, unable to get past early trauma, succumbs to addiction; her indomitable mother Belle; Chicasetta matriarchs, grandmother Miss Rose; great grandmother and namesake Dear Pearl. Then there is clever, determined Coco, the third sister, who heads for the Ivy League with hardly a backward glance, as well as the punishing color conscious paternal grandmother Nana Claire. The white characters who appear range from clueless to dangerous.

At its core, despite early scenes of abuse, Ailey Pearl’s is a strong and loving family. This plus her own feistiness and sense of self sustain her in a racist and often male-dominated world. She decides not to take the path (medical school) her family wants for her and follows instead her passion for history, using her studies to untangle the story of race in America, in Georgia, and in her own family. It is a story filled with suffering, resilience—and a surprising twist.

The Love Songs of W. E. B. Du Bois is a serious novel, a terrible but ultimately uplifting saga, its purpose perhaps best summed up in one of the epigraphs Jeffers chooses from W. E. B. Du Bois: “You misjudge us because you do not know us.”