Love and Ruin: A Novel 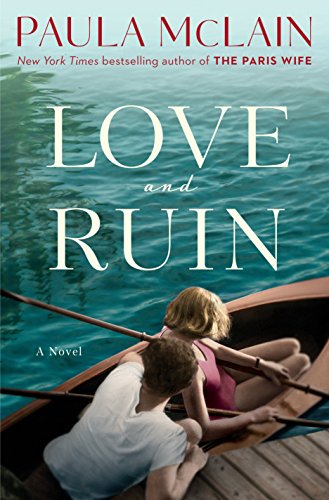 “There is no doubt that this is McLain’s finest novel yet.”

Paula McLain’s latest triumph, Love and Ruin, details the path of Marty Gellhorn, war correspondent, novelist, and wife of Ernest Hemingway. When Martha meets Ernest, much by happenstance, at a Key West bar, she is already the author of both a book that has been a total flop and one that has had a bit of positive feedback.

In the beginning, Martha sees Ernest only as a mentor and perhaps a friend who has the ability to help her along her writing journey, although it is revealed in one of the few chapters from Ernest’s perspective, that he set his sights on her the moment he first saw her.

When Ernest speaks of heading to Spain to cover the Spanish Civil War and shed light on what is happening there, Martha’s interest is piqued. Despite her mother’s fears about her daughter going into a war zone, Martha feels that she has been searching for a higher purpose, for something that matters. With Ernest’s help and a favor from a friend at a magazine, she is able to obtain the proper credentials to go to Spain, though only as stringer.

While the war is harrowing, painful and very, very dangerous, Martha begins to realize how alive she feels in the midst of it and, though she is surrounded by acclaimed journalists, begins to realize that her voice and her perspective matter, too, that they are something the world needs to hear.

It is also during this first trip to Spain that Martha comes to realize Ernest’s deep feelings for her. She is shocked at first and tries to hold him off, reminding him of his marriage, his children, and all he has to go home to. Whether it’s the war, the chemistry between them or a combination of the two, the affair that begins between them feels inevitable, the only real antidote the massive suffering around them.

Even still, the pair is determined tha, no matter how difficult it is they won’t let their relationship seep back into the real world once they are home from the war. Fans of Hemingway or history or both know that this pact doesn’t last long, but how the relationship unfolds is beautifully portrayed.

McLain paints a vivid picture of what it was like to be in the midst of war. From seeing an innocent child die to literally being in the trenches with soldiers to being the only woman—and first journalist—on the beaches of Normandy. It is clear that telling the stories of loss and ruin, of injustice and oppression, that surround war is Martha’s purpose in life, her passion, from her first trip to Spain.

Beyond being a novel about war and romantic love, this is also a novel about family. McLain beautifully draws the relationship between Martha and her three stepsons, Ernest’s children from his two previous marriages. In a lot of ways, she becomes a mother to them and her love and worry for them shows that.

Martha’s relationship with her own mother is particularly notable as well. McLain reveals Martha’s mother to be her voice of reason, her port in the storm, and the person that she is most able to share her painful, honest feelings with, even when it is difficult. Martha certainly lived an unusual life for a woman of her generation, and her mother’s support is a part of that.

One of Martha’s very best qualities, which McLain portrays so well, is her dogged independence. In an unselfconscious, unassuming way, she refuses to conform to societal norms and, while it is her independence that Hemingway falls in love with first, he perhaps underestimates his own dependence or ability to allow his wife, whoever she may be, to have her own wants, needs and, most important of all, career. Within that, though, Hemingway shows moments of great selflessness and growth.

From the detailed and painstaking depictions of Marty’s life as a war correspondent to the tender and often trying moments of being a wife to one of the world’s most celebrated writers, the author treats her heroine with grace and a great deal of respect. There is no doubt that this is McLain’s finest novel yet.