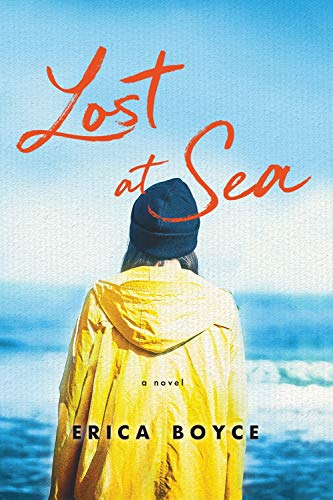 “Lost at Sea is a story of love, loss and grief, and of people who try their darndest to do the right thing, but have it turn out all wrong anyway.”

This atmospheric cozy-almost-mashup-suspense story is filled with themes cozy readers expect. A small town and a close-knit community peopled by characters who have known their neighbors most of their lives and who help each other out through life's many challenges. And one theme not usually found in cozies—opioid addiction.

The story is set on the coast of Massachusetts in a commercial fishing village, a seaport called Devil's Purse. It's a place where work is hard, rough salty weather can make life difficult, and danger is an everpresent hovering threat. The danger is rarely spoken of, though. Not by the fishermen and not by the fishermen's wives who stay strong until their men return at the end of the day, and stoic when they don't.

". . . the women allow themselves one good cry behind closed doors before setting their jaws and searching for job listings. . . . Elise Cunningham found out her husband was missing through a phone call in between clients at her in-home massage parlor. And she hung up the phone, pumped fresh oil into her palms and pressed her fingers into the next fleshy back. When Evan Bannock was lost at sea, his wife, Shirley, quit her day job and opened a marine supply store selling tackle and rope to her husband's friends . . ."

The book's somewhat vague and confusing opening pages show teenage Lacey meeting up with her nine-year-old companion, Ella Staybrook. Lacey, Ella's former babysitter, is newly arrived home from a drug rehab facility, but this unlikely friendship seems to make young Ella's parents and the townsfolk a whole lot less uncomfortable than it might be in real life.

Ordinarily, novels about addiction tend to be didactic and preachy, but thankfully this author doesn't inflict much of that on the reader. Though addiction plays a part in the story, and there are some unsettling scenes, it does not overwhelm the plot.

"(Lacey) held the baggie up to the overhead light. The pills were starting to break down into dust, as if they were shedding their skin, waiting for her. Her arm trembled slightly. . . .

The story kicks into gear when John Staybrook, Ella's father, doesn't return from a day of fishing. It doesn't take long for this news to sweep through and disrupt the entire town, raising plenty of questions like why did he go out in someone else's boat, and why did he venture out at all in inclement weather.

When Ella (who seems to have a story voice and inner dialogue mature beyond her years) is told her father is lost at sea, she's immediately overcome by denial and doesn't believe it. No, she is convinced he ran away and blames her mother:

Later, when Lacey tries to console her, Ella holds fast to what she wants to believe, and asks Lacey to help her find her father:

As Ella continues to search and ask unanswerable questions about what happened to her father, long buried secrets are unearthed. When provisions of John Saybrook's will leak out, two people find themselves in a questionable alliance.

Author Boyce does an amazing job of putting local color on the page. Her description of the local tavern rings of authenticity:

"Soon enough, the place caught its nightly rhythm, Jimmy pulling pints of Bud while neon lights flickered above his head. Occasionally, a tourist would wander in, having heard that the Breakwater served the best cup of clam chowder in town. Their eyes would widen, taking in the tiny, dark room filled to the brim with fisherman, leaning up against the bar and standing by the windows in clusters, their paint-swabbed jean and old sweatshirts, their faces beaten to a certain kind of red-tanned sameness by the sun and the salt, swearing  and laughing and wiping at their watery eyes. . . ."

Later, when the crushing news of John's disappearance catches up to everyone, a sort of shameful guilty relief takes hold:

"Jimmy poured a round on the house. Glasses passed from hand to quiet hand. Beer sloshed out of them along the way so the guys in back only got half-full pints. They drank together, glancing up at the ceiling as they swallowed. A small miracle, they knew, that it wasn't them. This time."

Lost at Sea is a story of love, loss, and grief, and of people who try their darndest to do the right thing, but have it turn out all wrong anyway.