Lossberg's War: The World War I Memoirs of a German Chief of Staff (Foreign Military Studies) 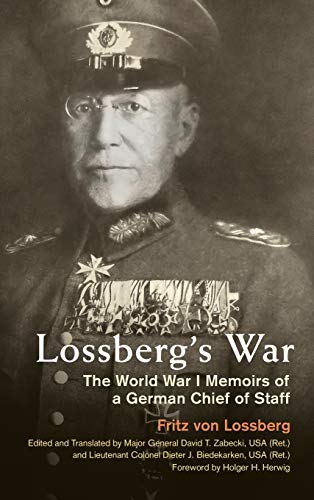 Some of the generals of the Great War have entered into common currency. Almost everyone knows about the American General John J. “Black Jack” Pershing, the Ottoman hero of the Dardanelles, Mustafa Kemal, or the French savior of the Marne, General (later Marshal) Philippe Petain.

Few, however, would ever utter the name of General Fritz von Lossberg. A Hessian by birth, General Lossberg had more of a scholar’s bearing than the impetuous look that is so often synonymous with Prussian military officers.

Despite his spectacles and grandfatherly face, General Lossberg was a brilliant military strategist who commanded the brave German soldiers of the 2nd, 3rd, and 4th armies as they fought the British and French armies at the Somme, Verdun, and Arras. The German Supreme Army Command (OHL) considered Lossberg their fire man; whenever the Imperial German Army was close to defeat, Lossberg would be sent in. As a result, General Lossberg is today regarded by military history specialists as the premiere defensive strategist of the Western Front.

This handsome volume edited and translated by retried U.S. Army officers Major General David T. Zabecki and Lieutenant Colonel Dieter J. Biedekarken presents General Lossberg’s battlefield journal from 1915 until 1918. There is even included a section detailing some of Lossberg’s postwar exploits. Fortunately for his legacy, General Lossberg left the German military in 1926, long before the National Socialists came to power.

Lossberg’s War is an academic publication intended for a very specific audience. Military historians and enthusiastic readers of military strategy will devour this book. Everyone else will likely avoid it.

This tome presents the day-by-day thoughts and decisions of General Lossberg, and as such this book is replete with military jargon. If you are adamant about approaching this book, it would be best if your familiarized yourself with the landscape of the Western Front during World War I first. This is no book for novices or people who get bored of military theory after one hundred pages.

Lossberg’s War may be for the connoisseur, but this volume shows in great detail that the German military machine defeated by the Allies in World War I was beyond impressive. Not only did the Germans enjoy well-schooled military intellectuals like General Lossberg, but they also enjoyed the service of fearsome fighters from all across the empire. General Lossberg, the chief architect of defense-in-depth (a system whereby fortifications and interlocking lines that make offensive incursions extremely dangerous), was clearly a genius, but he won accolades and medals thanks to the bravery and fortitude of the men that served under him.